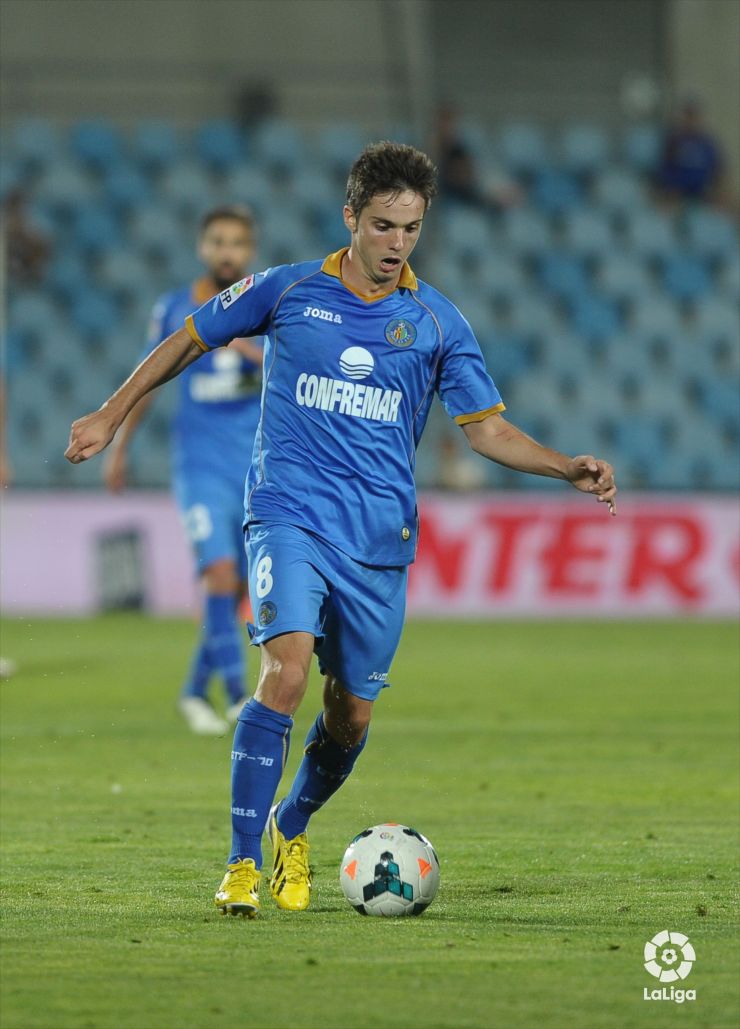 "It will always be special to play against Real Madrid"

Getafe midfielder Pablo Sarabia talked with LFP.es about his thoughts ahead of Sunday’s match against the club he began his footballing career with.

Ever since Getafe was promoted to the Liga BBVA, the bond between the Dark Blues and Real Madrid has been very strong. Pablo Sarabia (Madrid, 1992) is a player who, just like Esteban Granero, Roberto Soldado and Dani Parejo before him, joined the South Madrid club to develop as a topflight footballer. The young Getafe central midfielder, who began his career at the Real Madrid academy, chatted with LFP.es ahead of Sunday’s clash with the Whites.

LFP.es: This Sunday you take on Real Madrid. How is Getafe preparing for this match?
Sarabia: It hasn’t come at the best time because we’re going through a poor run of form at the moment. We’ve gone a few matches now without things really going our way, but we have to be united and try to play as well as possible and make things difficult for them.

LFP.es: It will be a special game for you. What are your own thoughts ahead of the match?
Sarabia: It is always special to take on your former team, where you spent so much time training and developing. It’s a match you always want to be at your best for.

LFP.es: What memories have you held onto from your years with the Whites?
Sarabia: I made a lot of friendships there. Thanks to God we were part of quite a decent generation of players and a lot of us are playing at a high level.

LFP.es: You made your UEFA Champions League debut during the 2010/11 season against Auxerre. Is that the most special game of your career?
Sarabia: Yeah, that is a match I will remember for the rest of my life. I remember it being the happiest day of my life. I had been working for that moment for years and finally it was made reality. All the academy players dream of that day and I had the good fortune to experience it.

LFP.es: The upcoming opponent aside, this weekend’s match is hugely important for Getafe. How will you stop this Real Madrid team?
Sarabia: We need to hold our shape and make things uncomfortable for them. We’ll try to make it an ugly match in order to prevent them from getting into their flow. We have to simplify things and be more effective, something we have been lacking lately and which is needed to take on the big teams.

LFP.es: It wouldn’t be the first time all three points stayed in the Coliseum (four wins from nine encounters with the Whites). Do you think it’s likely that history will repeat itself for a fifth time?
Sarabia: Its' always difficult. It's true that we play better in the Coliseum, because its a tricky ground to come to, but you always need a bit of luck on your side in order to beat a great team like Real Madrid.

LFP.es: Getafe’s last Liga BBVA win came on the 29th of November. What is the mood in the dressing room like at the moment?
Sarabia: Us players are well aware of the situation we are in. Nobody likes to be in a poor vein of form, even less so when they were well placed in the league. Now the team needs to be united and work hard together. I’m sure our luck will change in front of goal.

LFP.es: Last season you almost qualified for Europe and you started off brightly this season too. What are Getafe’s objectives for this league campaign?
Sarabia: Now the aim is to get as many points as we possibly can from each match. We’ll think about where we’ll finish the season when there are five games to go.

LFP.es: You’ve changed from being a fixed starter to an impact sub. How are you dealing with that?
Sarabia: Every footballer wants to play as many minutes as possible and feel like an essential part of the team, but at the moment that’s not the role I have. Although I would prefer a different role, I have to accept my situation and continue working hard to earn my place in the starting XI.

LFP.es: Back to Sunday’s game, you will come face-to-face with some of your former Castilla teammates. How would you assess the progress of players like Dani Carvajal and Álvaro Morata?
Sarabia: I’m delighted they’re both playing so well, especially Carvajal, who I think is a great player and is a good friend of mine. At the moment Morata isn’t getting the minutes he would like, I want to send him good vibes so he keeps working hard.

LFP.es: A lot of your current teammates have passed through the doors of the Real Madrid academy, like Pedro Mosquera, Jordi Codina and Borja Fernández. It can’t be easy to leave a club like Madrid, but you have all been able to play in the Liga BBVA. Would you recommend Getafe for players looking to develop their game?
Sarabia: Yes, of course. It is a well-run club, it’s in the same city as Real Madrid and there are opportunities to play here. On top of that, the club leans towards younger players. It’s a healthy, if somewhat strict, club.

LFP.es: Have you spoken with or do you plan to speak with any of your former teammates?
Sarabia: Yes, always. Playing against people you have grown up with isn’t a nuisance, but rather something to savour. It is an extraordinary thing.