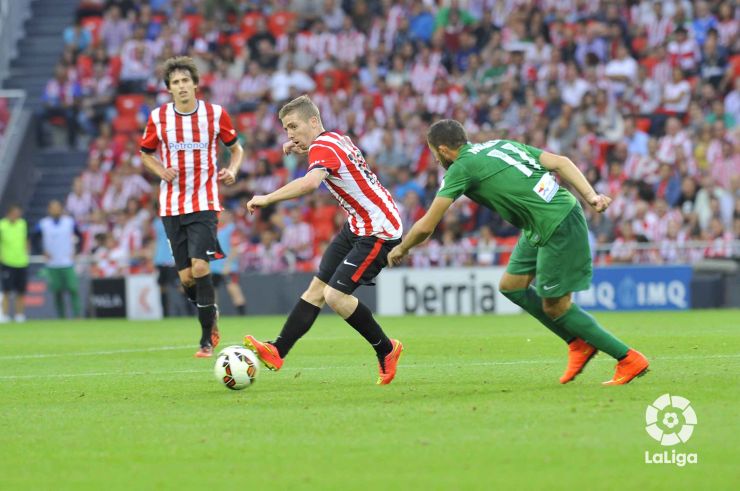 Goals from Aduriz, Iturraspe and Muniain earned a win for the Bilbao side, which has enjoyed a fantastic week after having qualified to the group stage of the UEFA Champions League.

Athletic Club beat Levante UD 3-0 on matchday 2 of the Liga BBVA. The victory was Ernesto Valverde's first of the 2014/15 season in the Spanish topflight.

The Lions controlled the first half in San Mamés, where the recent historic night that saw them qualify for this season's UEFA Champions League was still fresh in the memory. Ernesto Valverde's men, led by Aritz Aduriz and Ibai Gómez, were relentless from the very beginning of the encounter although Levante tried their best to remain resolute in defence.

Following a great effort from Aduriz and a good save by Jesús Fernández in the Levante goal, the home side was rewarded for its persistence. Athletic took the lead through the San Sebastian-born striker, who headed home a spectacular corner kick from Ibai. Aduriz has now scored seven goals against Levante to date.

In the second half, José Luis Medilibar's men attempted to create danger on the break, but were up against a team with an even greater appetite for goals. First up was the unmarked Ander Iturraspe, who finished off another Ibai cross to make it 2-0 in the 51st minute. Levante's misery was compounded when Iker Muniain killed off the game, giving Athletic their first Liga BBVA win of the 2014/15 season.