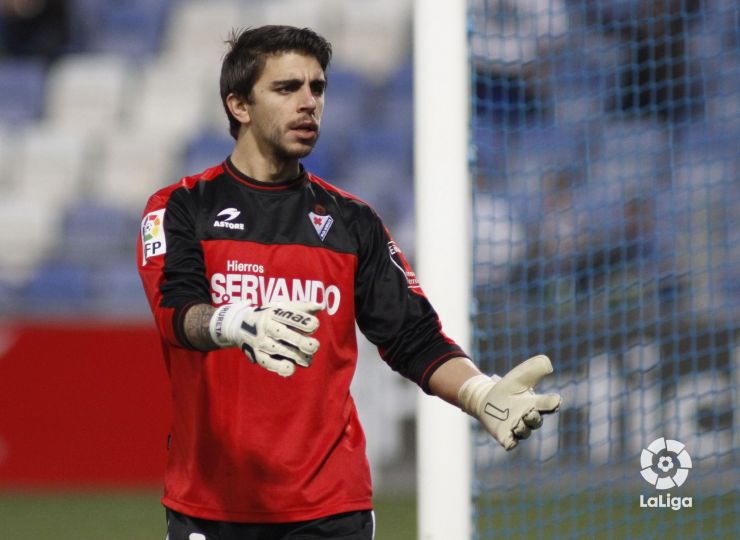 Irureta: "With the desire we have, we’ll take second place"

The Eibar goalkeeper analyses the armeros' great season for LFP.es and talks about the final stages of the Liga Adelante, in which there's still everything to play for.

The Liga Adelante is red hot and SD Eibar can continue to make history this season. The armeros are second in the table with 63 points, two behind the leaders RC Deportivo de La Coruña, their next opponents on the Sunday. One of the cornerstones of the team, Xabi Irureta, spoke to LFP.es about the good season his side has had.

LFP.es: You're second with 4 matchdays remaining. Did you expect to have such a good season?
Xabi Irureta: In all honesty, no. At the beginning of the season our aim was to stay up. We managed it quite early and found ourselves in the top part of the table, so our objective changed and we focussed on fighting to reach the play-offs. Now we're up there we have a lot of enthusiasm and desire to earn direct promotion.

LFP.es: You've let in fewer goals than any goalkeeper in the Liga Adelante. Is your team's style of play as defensive as they say?
Irureta: Yes. As our manager tells us, the aim is that all eleven of us defend and when we have the chance to play up front we attack from the goalkeeper. The team is doing a great job defensively and it can be seen in our results.

LFP.es: Basque football has a great tradition of goalkeepers, from Iribar to Zubizarreta, as well as Luis Arconada. Do you model yourself on any of them?
Irureta: I've always liked Iribar and Arconada but because of my young age I wasn't lucky enough to see them play. I try to look at current goalkeepers that play among the elite of Spanish football.

LFP.es: Next matchday you're playing against the leaders, RC Deportivo de La Coruña. How will go into the game at the Riazor?
Irureta: With desire and enthusiasm, believing that we can win. We know we have to play very well and we're training for it. We will have to do things well if we want to come away with something from the Riazor.

LFP.es: What's your prediction for the end of the season?
Irureta: I'll stick my neck out and say that, with the enthusiasm and desire we have, we'll take second place.