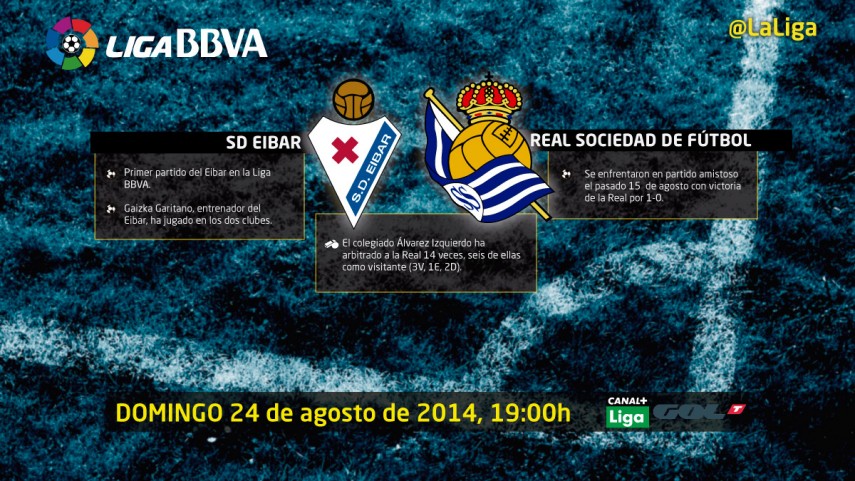 Ipurua to be 'baptised' in the Liga BBVA

Eibar host Real Sociedad in what will be their first ever game in the best competition in the world.

SD Eibar's debut in the Liga BBVA is a special moment for the club. After achieving promotion and the Liga Adelante champions title last season, Eibar have finally fulfilled their dream and will play their first ever game in the top flight. And they will do so in a thrilling derby against Real Sociedad de Fútbol, who come off the back of beating FC Krasnodar (1-0) in the UEFA Europa League preliminary round.

The Eibar manager, Gaizka Garitano, has selected all his available players for this clash. The injured Gorka Kijera is the only absentee for the Armeros and their latest two signings could make their debuts: Derek Boateng and Federico Piovaccari. The Txuri-urdines manager, Jagoba Arrasate, is without the injured Alfred Finnbogason, Ion Ansotegi and Jon Gaztañaga, and has left Liassine Cadamuro and Daniel Estrada out of the matchday squad.

"At the start of last season, when we had been promoted from Segunda División B to the Liga Adelante, we didn't know whether we'd be good enough for the division, and now we’re in the same situation, determined to compete", said Garitano.

Arrasate, meanwhile, was full of praise for his opponent: "Eibar are a very well coached and organised team who compete very well. It's difficult to surprise them and they don't let in many goals at the Ipurua. We want to start well and take the three points."