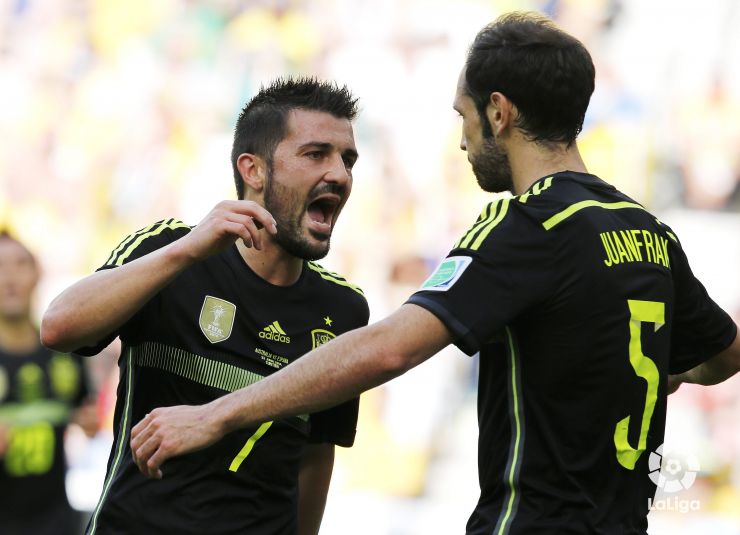 Both players, former teammates at Barcelona, enjoyed special moments during the match against Australia, which ended with a 0-3 win.

The Spanish national team bid farewell to Brazil with a resounding 0-3 victory over Australia in their third Group B game. During the clash between the teams, two men further cemented their legendary statuses within the national side managed by Vicente del Bosque.

Without a doubt the name Andrés Iniesta will always be associated with the winning goal in the final of the 2010 South African World Cup. The diminutive midfielder scored against the Netherlands in the 116th minute to ensure glory for his country. The Albacete native received his 100th cap for the Spanish national team on Monday in a match he seemed to control at will.

Only seven Spaniards have played more games for the national side than Iniesta. With his start against the Australians, he equalled Carles Puyol’s record of 100 caps, and now only trails Raúl González (102), Fernando Torres (110), Xabi Alonso (114), Sergio Ramos (120), Andoni Zubizarreta (126), Xavi Hernández (133) and Iker Casillas (156).

At 30 years of age, the next challenge for the Spanish number '6' is the 2016 European Championships and, fitness permitting, the 2018 World Cup in Russia. Four years filled with objectives that could further his legendary status within the national team.

On the topic of Spanish footballing legends, David Villa deserves a mention as the country's all-time highest goalscorer. Since making his debut with the national team on 16 November 2005, the product of the Real Sporting de Gijón youth academy has earned the reputation of a world-class striker. His speed, strength and fantastic positional sense have made him one of the figureheads during the most successful period in the national side's history, winning the 2008 European Championships and the 2010 World Cup.

With his back heel against Australia, Villa scored his 59th goal for the national team, a tally that makes him the highest goalscorer in Spain's history. His strike against the Socceroos also makes him the fourth Spanish international to score in three World Cups, joining the likes of Raúl González, Fernando Hierro and Julio Salinas. But Villa's legacy does not end there. The Asturian has also scored more World Cup goals than any other Spaniard, racking up nine during the 2006, 2010 and 2014 competitions.

Despite all that, the former Club Atlético de Madrid, FC Barcelona and Valencia CF striker stated in Brazil: "I hope my record is broken soon because that would be good for the national team. It would be a source of enormous pride for me because I will always be a part of the national side's history".