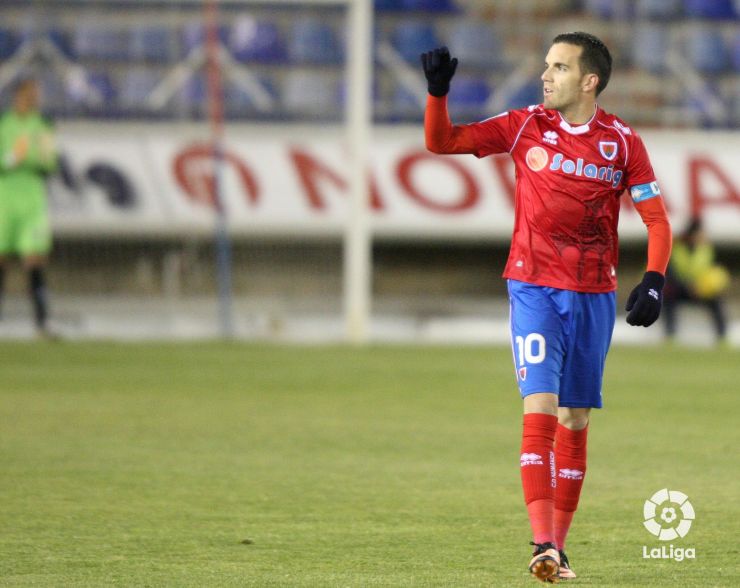 LFP.es spoke to Numancia skipper Julio Álvarez about his revival with the Soria side, his experience with the Venezuela national team, and the club’s objectives.

Julio Álvarez Mosquera (Caracas, Venezuela, 01/05/1981) is having a season to remember with CD Numancia. Following a 2012/13 campaign blighted by injuries, his five goals in Liga Adelante in the 13/14 campaign have seen him become the side’s second highest scorer. Also, the rojillo’s captain has played the most minutes for his side, taken the most shots at goal and completed the most passes.

LFP.es: You have a lot of experience both in Liga BBVA and Liga Adelante. Is this the most even season you’ve ever seen?
Julio Álvarez: Yes, without doubt. I think the fact that no clubs have been able to spend money on reinforcements has had a big effect on the competitiveness of Liga Adelante. At the end of the day, all clubs wants to make the competition better.

LFP.es: Juan Antonio Anquela’s sides are usually entertainers in the league; what is the secret?
Julio Álvarez: The gaffer is a coach who lives football. He is passionate and values what he has achieved and where he is. He is conscious of how good it is to train and he takes everyday as if it were a new opportunity. His success is in that he asks a lot of himself and the people he works with.

"In Liga Adelante it is clear to see that there are no favourites, and all you can do is show that you’re better than the opponents"

LFP.es: You earned promotion with Numancia in 2007/08, is this the objective for this campaign, too?
Julio Álvarez: The objective is to carry on playing professional football and this is achieved by earning safety in the division. Then, Numancia can aspire to play in Liga BBVA because they’ve done it more than once before. But I think that this is the prize of work done over the course of 42 games.

LFP.es: This side is the second tightest defence in the league; do you think this is vital when trying to earn promotion?
Julio Álvarez: Definitely! It is more important to defend well than attack well, because defending is the difference. Knowing that like many sides we don’t have a player who can score 20 or 30 goals a season, we have to make our goals count and you do this by defending well.

LFP.es: You lead the Numancia statistics, are we now seeing the best of you?
Julio Álvarez: I’ve had a lot of good moments. I respect the injuries and I’m now enjoying football and playing with a sense of ease. The whole side is having a good season and now the final stretch is upon us, and we have to be at our best, especially those who haven’t played a lot, because they will have to bring energy to the side.

LFP.es: You’re on course to equal your best goal return, what does this better offensive presence owe to?
Julio Álvarez: This season I’ve scored a lot of penalties. Football is full of runs where goals don’t go in and do, and you have to take advantage of when you’re in a good run. I try to improve each season. Last year was difficult due to injury and this year I’d like to have a good season.

LFP.es: Your debut as an international footballer came late on, how did you live the moment?
Julio Álvarez: It’s something I will always remember. They are moments where if you don’t live them, you can’t describe them. To play a match with the national side has a certain emotion, intensity and pressure at the top level and I’ve been lucky enough to share some fantastic moments that will always stay in my heart.

LFP.es: Do you see yourself going to the 2015 Copa América in Chile with Venezuela?
Julio Álvarez: I work day in, day out to achieve challenges and goals. There are a lot of things to evaluate, because I’m at an age now where travelling isn’t easy, and there are youngsters who deserve the chance to grow. Irrespective of the decision that the coach takes, I will always be a fan of the 'Vinotinto'.

LFP.es: Coming back to Liga Adelante, the next game you face is against CE Sabadell FC, a side who are in need of good results…
Julio Álvarez: The side that goes out in a more concentrated state of mind will have a lot won in this game. Irrespective of the runs of each team, you have to show that you’re a better side than Sabadell. In Liga Adelante it is clear to see that there are no favourites, and all you can do is show that you’re better than the opponents.