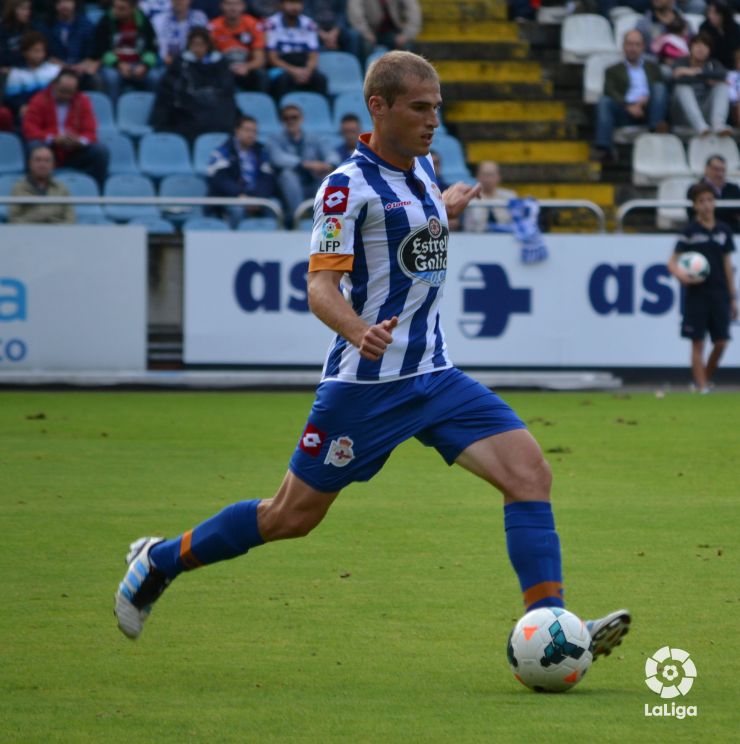 "In football there are labourers and architects, and I'm a labourer"

RC Deportivo de La Coruña have gone from hell to heaven in only six months. Following a difficult summer, the club are living one of the season’s best moments: top of Liga Adelante playing an elegant and unstoppable brand of football. One of those responsible for this success is Álex Bergantiños (7/6/1985). The central midfielder has become a key component of the side over the past two years, something he thought would never happen in 2008, when he was loaned out by his childhood club. His next objective is to achieve promotion.

LFP.es: How do you see the side following the first few months of the season?
Álex Bergantiños: We're matching up to our expectations. We're a solid group, hard to break down that let in few goals. We're confident. Even though the summer was difficult due to relegation and the squad was put together last minute, we've adapted well.

"Promotion is the priority. We want to achieve promotion and even though the league is very even at the moment, our only objective is to go up"

LFP.es: You've been promoted to Liga BBVA twice. Do you think it's a realistic expectation for this season?
Álex Bergantiños: It's our priority. We have the ambition to achieve it and although the competition is very even, our only objective is to go up.

LFP.es: How does it feel to be within touching distance of Liga BBVA?
Álex Bergantiños: Liga BBVA continues to be the world's best league, one that all players want to play in. The atmosphere of the stadiums, the players and the impact it has are all incredible.

LFP.es: The fans love you, the team are playing well and you're in great form; do you feel that it's the best moment of your career?
Álex Bergantiños: Yes. I dedicate myself to what I like and I play for my local club, where my friends and family are and everything I've always wanted. After various other experiences at other clubs, I've finally arrived where I always wanted to be. I feel lucky

LFP.es: How do you define yourself as a central midfielder?
Álex Bergantiños: In football, and above all in centre midfield, there are labourers and architects; I'm a labourer.

LFP.es: Who would you like to line up alongside in the centre of the park?
Álex Bergantiños: Xavi Hernández. His touch, his vision and his teamwork make him the best central midfielder of all time. It's a shame he hasn't ever won the Balon D'Or, despite not being a goal scorer, he deserves it.

LFP.es: Last year the club had some hard times away from the pitch; how did the dressing room view this?
Álex Bergantiños: It was complicated in every aspect. In addition to the economic difficulties, the side disbanded following relegation and the question of whether such an historic side would continue was there. For me it was particularly difficult because, in addition to being a player, I'm a lifelong fan of Deportivo.

"Valerón was the key component who helped us in the dressing room. He's not here any more but we have to carry on moving forwards"

LFP.es: How does it feel to share a dressing room with some of the most important veterans in Spanish football, like Carlos Marchena, Manuel Pablo and Juan Carlos Valerón?
Álex Bergantiños: I had them in my sticker collection when I was young and now I play with them. It's priceless, they're special feelings. I learn from them on a daily basis. Marchena, for example, is a world champion who has achieved everything in the game but carries on giving 100%.

LFP.es: Does the side miss Valerón?
Álex Bergantiños: He was our leader in the dressing room and a key piece of the side who carried us with him. He's not here any more and we have to carry on moving forwards. We keep in touch with him and it makes us happy to see his success at Las Palmas.

LFP.es: What do you want from 2014?
Álex Bergantiños: Promotion. Without doubt it would be the best present for the fans, professionals and the club. We'd come out of debt and be able to move forwards.