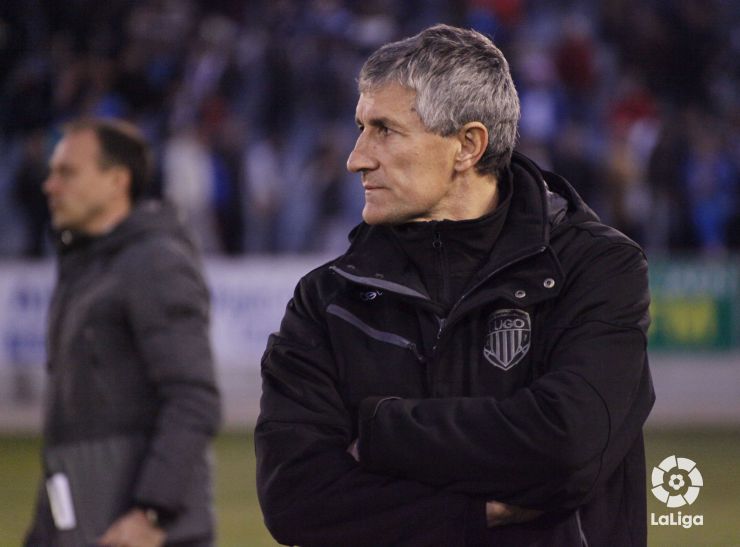 "I'm at a place I love and where I am loved"

LFP.es were with a legend of Spanish football, Quique Setién, who since arriving at Lugo in 2009 has helped write the best page in the club’s history thus far.

In 2009 Quique Setién took over at Lugo and helped revolutionise football in the Galician city. A legend of Spanish football, the veteran of a thousand battles arrived in a city without a footballing tradition. Nothing would be the same again. The start was not easy, but the confidence of the club and tranquillity in the job helped him, alongside sporting director Carlos Mouriz, create the best Lugo side there has been, a team who are high up in Liga Adelante. LFP.es met him.

LFP.es: What have you given, or what does Lugo give you to keep you here, when it is rumoured that other offers from bigger clubs have come in?

Quique Setién: Lugo gives me a lot, above all the ease to be able to work. Here you work happily. The sporting director, Carlos Mouriz, is a football man and we have a good relationship. I've had offers to go, to earn more money with more traditional sides than Lugo, but one can stop being happy for other things like the professional projection. I'd enjoy coaching Lugo the same as I would Real Madrid. I don’t have big pretentions, nor am I economically motivated. I’m at a place I love and where I am loved.

LFP.es: Is it this tranquillity and confidence that keeps you at Lugo? Are these the keys to the club?

Quique Setién: In this city and this club, except with the weather and the means that we have, everything is extraordinary. We have had a lot of players that have come in a state of depression and they've recovered. There is no great pressure and everyone is clear about the size of the club. You have to grow little by little without getting carried away. Everyone has spoken about us, that we play an attractive brand of football, that we like to have the ball. This way the majority of the players are happy. The atmosphere is good, we go out for dinner each week, there's little pressure, the people treat you well, you are paid punctually each month.

LFP.es: Was implementing your style of play on Lugo difficult? Quique Setién: The first year was the hardest. I had to convince the players that we had to play like that, because above all, defenders aren't used to having responsibility with the ball. I'’s no good just booting it out. At the start it was hard, but then we got it. Now we have a solid base and this is an important advantage over sides who have new managers, who are changing players and it is more difficult for them to create a new idea or system.

Quique Setién: At the wedding of Eusebio, current coach of FC Barcelona B, I had the opportunity to speak to Johan Cruyff and there I told him that I would have given anything to play for his 'Dream Team'. What I saw then stayed with me and that's what I try to transmit to my players. I think what I feel and that’s what I try to transmit. To work in another sense would be too difficult.

LFP.es: Lugo have been, for the first time ever, in the Liga BBVA promotion places. Are you conscious that the side are making history? Quique Setién: Things are happening that haven’t happened before. But I keep my feet on the ground and do my work and try to give happiness and make the club's name bigger. Everything reverberates off of public recognition, in the future, in our contacts. We are doing things that have't even been done in this city. In any case, the second place that we attained is something anecdotal. Football has these surprises and sometimes the little guys can make people smile.

LFP.es: Lugo are a point off the playoffs. Do you think promotion is realistic for Lugo? Quique Setién: Possibly, yes. It has been 28 games and we're a point off of the playoffs. We are a competitive side, except for some slip-ups, like with Girona. We are another side, but we are humble, because humble sides can also get the job done. We are conscious of our limitations, but this doesn’t impede us going into games.

LFP.es: Your contact finished on the 30th of June. Is your future with Lugo?

Quique Setién: One day I'll have to leave Lugo. We always sort this out at the end of the season and the first person to know will be the person who gave me the job, Carlos Mouriz. I will never negotiate anyone who doesn’t show the same confidence in me as CD Lugo have done.