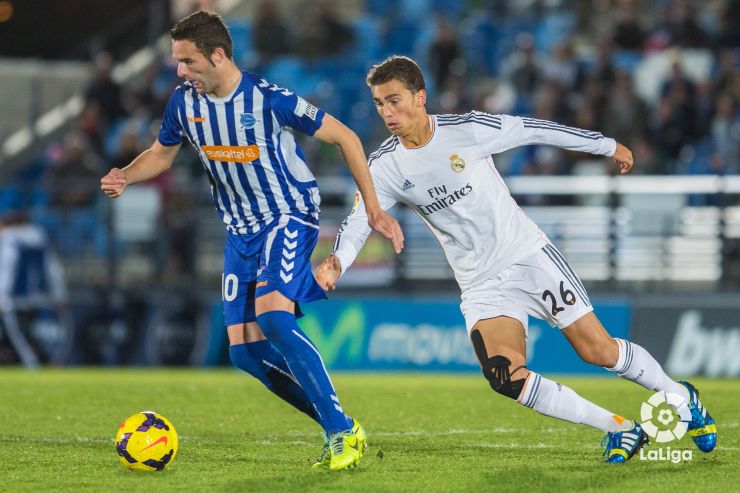 "If you lack confidence you are not the same player"

Alavés' top goal-scorer Borja Viguera answered some questions for LFP.es during the Christmas break and spoke about his great start to the year.

Deportivo Alavés' return to the la Liga Adelante has seen one of its players' names feature prominently among the competition's top goal-scorers. But Borja Viguera's performances this season come as no surprise to fans of the Basque side as the striker was one of the architects of the side's promotion last season. Having come through the Real Sociedad de Fútbol youth academy, Viguera made his Liga BBVA debut with the txuri urdin before trying his luck at Gimnàstic de Tarragona and Albacete Balompié.

LFP.es: What have been the highlights of your first three months in the Liga Adelante?

Borja Viguera: We have had a good squad since last year and the new players have settled in fantastically well. I think that is a really positive. We have been competitive and we have not lost face in any of our matches. Also, we are scoring with relative ease.

LFP.es: What does it mean to be one of the few players in the squad to have played in the Liga BBVA?

Borja Viguera: My experience playing at the top level has helped me. The year I had after the injury (he tore his cruciate ligament during his time at Tarragona) really helped me to understand what football is about, the sacrifice and the effort.

I think confidence is the key. If you lack confidence you are not the same player and it is something I have had from the first day I arrived in Vitoria

LFP.es: All the Liga Adelante teams are very close on points, what do you think has made the difference so far in the competition?

Borja Viguera: We already knew that the Liga Adelante is very competitive and close and that the matches can turn on the smallest of details. Maybe those details have led to us dropping points, but we need to correct those errors so that we can keep the points.

LFP.es: Twelve goals in 19 matches is nearly as many as you got last season. To what do you owe your current form in front of goal?

Borja Viguera: I have been able to get back to my best thanks to the confidence my coaches have placed in me. If you lack confidence you are not the same player and it is something I have had from the first day I arrived in Vitoria. Confidence helps you raise your game and play differently.

LFP.es: What are your goals for the rest of the season, both as an individual and a team?

Borja Viguera: As a team we want to stay in the division after some very tricky years in the Segunda B. Staying in the Liga Adelante would give us economic and sporting stability and I thank that, between us, we are going to achieve that. On a personal level I want to try and maintain that level, I know I have a lot of room to improve, but I want to keep helping the team as much as I can. We have to work hard and become hard to beat in the Mendizorroza, which is very important in order to achieve our goals.

LFP.es: Your contract expires in 2015. What are your plans for the future? Do you see yourself in the Liga BBVA in the short term?

Borja Viguera: I have to keep working in order to be a better player and to help the team. I continue to work hard for the good of the team and for my own good. Every player's dream is to play in the Liga BBVA and if I can do that with Alavés, I would love to do it.

LFP.es: The club has recently named Juan Carlos Mandiá as its new manager, what will the new coach bring in 2014?

Borja Viguera: He has already put on the table what he wants from us. He wants passion and hard work and I have already seen that in the matches we have played.

Borja Viguera: I would like good health in 2014, for me, for all my family and for the whole team. We are all going to be needed in order to pick up points this season and in order to have peace of mind throughout the year and to celebrate staying up.