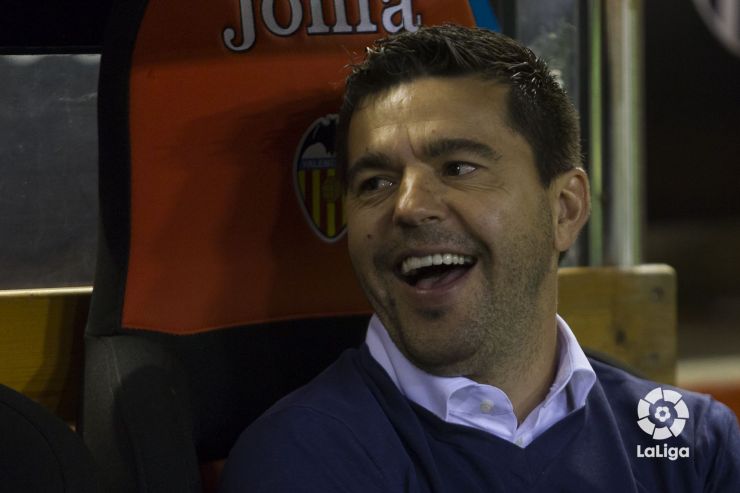 "If we stay up, Getafe will fight for Europe next year"

Cosmin Contra, the azulones' coach, was feeling optimistic about the closing stretch of the Liga BBVA in an exclusive interview with LFP.es.

Cosmin Contra (Timisoara, Romania, 1975) arrived in the Liga BBVA last March tasked with getting Getafe CF back on track. The Romanian coach renewed expectations for the azulones and managed to get them out of a rut in which they had played fifteen matches without a victory by means of a win in the Mestalla against Valencia CF (1-3). Although the side from the capital is still in the fight for salvation, Contra was hopeful and optimistic about the final stretch of the championship in an exclusive interview with LFP.es.

LFP.es: There are six matches left and Getafe are immersed in the fight for salvation. How do you deal with this significant challenge?

Contra: With the same energy as I have done until now. Having faith in the fact that we can get through it. I try to transmit that energy to the players every day.

LFP.es: When you arrived you noticed that your players were 'switched off'. How is the dressing room now?

Contra: Morale is still a little low because we lost the other day to Elche with the last touch of the ball. That match really hurt us. There is no time to feel sorry for ourselves and now we have to try and get points out of every match, the boys have to give everything on the pitch and have faith in the fact that we can get through this.

LFP.es: The first of those six 'finals' is against Atlético, the Liga BBVA leader. What are the keys to stopping Simeone’s great team?

Contra: We are playing against what is currently the best team in Spain. They are on fire at the moment, their morale is going to be sky high and they'll be brimming with confidence when they visit us. In order to pick up points we have to compete with them, we have to fight for every ball as they do. A lot of people said that Atlético wouldn’t be doing this well at the end of the season but I think they are playing just as well and are just as competitive.

Contra: I arrived at a time of transition, it was a team with a lot of new players. That Atlético is nothing like the one now, it has changed a lot. Now it is a team that has won titles, it has really transformed and has become one of the best in Europe.

LFP.es: You have only been with the team for a few matches, but your grit and brand of football can already be seen in the team. What do you think is needed to polish things off?

Contra: The players are still lacking confidence because the team is low in the table. We have very good players, but when you are low things sometimes don't work. We have to have the attitude and the grit we had in matches like the Valencia game in the remaining six matches. You have to give everything and be aggressive. That is my idea and I try to transmit it to the players. I'm doing everything I can to give them the confidence they need to get out of there so that Getafe stays where it deserves to be.

LFP.es: Few are aware of your first venture in Spain as a manager, at the helm of modest team CF Fuenlabrada in the Segunda División B. What did you learn there?

Contra: It was a very good experience, where I think I worked well. At all the teams I have worked with I have tried to work hard and get results. So far I have achieved it, but I hope to be able to achieve it with Getafe too. I'm sure that, if we stay up, next year Getafe will be fighting for a place in Europe. I know myself and my ambitions. If we stay up, the people of Getafe will enjoy this team.

LFP.es: What are the differences and similarities between the current Getafe and the one when you were a player?

Contra: We saved ourselves on the last day, a new coach came in and we got through it. I have lived through that feeling as a player and I transmit to the players that it is possible.

LFP.es: Getafe has never been relegated to the Liga Adelante and they have been in the Liga BBVA for ten consecutive years. You seem convinced that there will be an eleventh.

Contra: I'm convinced. But I have to transmit that conviction to the players. I am the head of the team, but I have told the boys that they have to step forward because they are the ones who can get us out of there.