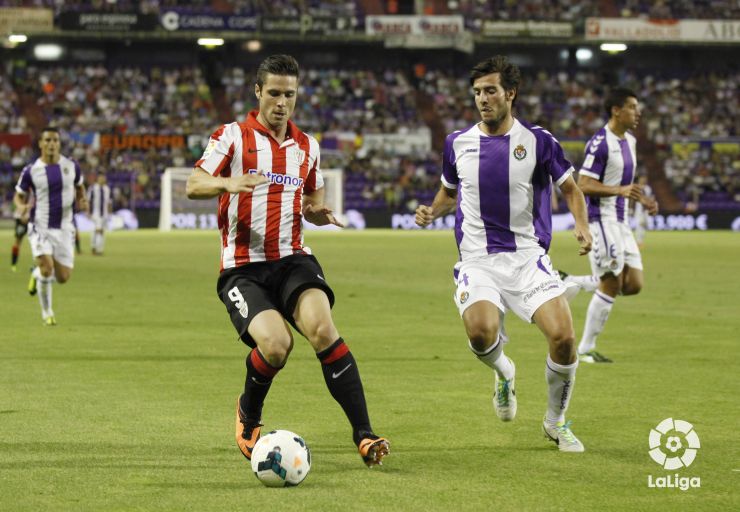 "I was itching to make my San Mamés debut"

AthleticstrikerKike Sola talks about his return from injury and how things are going for the Lions.

Kike Sola (Pamplona, 1986) is one of the more recent arrivals at Athletic Club. The striker was keen to get started in Bilbao last summer when he signed from Osasuna, but an injury to his left calf muscle kept him sidelined for four months. Fully recovered, he now dreams of helping his new team, which is enjoying a fantastic season, as well as scoring his first goal in a Red and White jersey.

LFP.es: You accomplished your dream of playing in San Mamés as an Athletic player. What was that like?

Kike Sola: It was a long time coming. I came during last summer and played in the first match, which was an away fixture, I got injured and had to sit out for the next four months. I was itching to make my San Mamés debut and, above all else,to make it a victorious one. We’re still winning, we’re still picking up points and with the fans we have, playing in this stadium is a privilege.

LFP.es: In the Copa del Rey match against Real BetisBalompiéyou looked to be fully fit, you have had an incredible recovery...

Kike Sola: That’s why I’m here. To work hard and get better in order to do my bit for the team, and if that includes scoring goals, all the better.

LFP.es: Is that one of the goals you still want to achieve?

Kike Sola: Yeah, of course. I really wanted to get off the mark straight away, but I have to be calm about it. Scoring can come in spells and the important thing is creating chances. I’ve had chances in the matches I’ve played, but it’s a question of being more clinical and pushing myself a bit harder.

LFP.es: Some strong competition has emerged from the team. Mikel Rico, with five Liga BBVA goals and two goals in the Copa del Rey, has been a revelation this season.

Kike Sola: Any top quality player, in this case Mikel Rico, is good for the team, for Athletic, and for us players. It’s very positive because his good form rubs off on the rest of us and makes us fight even harder to make it into the starting XI.

LFP.es: This Sunday Athletic travels to Osasuna, and you’ll return to what was your home not so long ago to represent the Lions. How will you approach the match?

Kike Sola: It’s going to be strange experience, not your typical weekend. After togging out for Osasuna for years, now I’ll be in the away dressing room. It’s still just another game, with three points to play for, however, Osasuna has a special place in my heart. It was with them that I made my debut, that I got my first taste of the Liga BBVA and I owe them a lot.

LFP.es: El Sadar, as you well know is a tough stadium to play in. What is the secret to taking the lead in the game?

Kike Sola: They are really high tempo games and Osasuna always tries to get the opponent to conform to their style of play in their stadium. We have to be on our toes and fight for every loose ball because they can cause you problems at any moment. We like to control the play and with that in mind I think, and I hope, that the match goes our way.

LFP.es: Fourth in the Liga BBVA table and fighting for a Copa del Rey semi-final place. What is the secret to Athletic’s recent success?

Kike Sola: We have a great squad, the team is very ambitious and keen but the most important thing is how united we are as a group. There are very decent and down-to-earth players in the squad and the level of friendship among us is tremendous, which is something you notice during matches in terms of teamwork.

LFP.es: Ernesto Valverdehas a good understanding of the club’s philosophy.Is some of the team’s success this season down to him?

Kike Sola: Definitely. Ernesto is a great coach. He has showed that in all the clubs he has worked with and it is a privilege to have him on our side. We are going to learn a lot of valuable things from him because he is showing the right way to do things.

LFP.es: Athletic has some important fixtures coming up, including Real Madrid at home. Is the plan to remain unbeaten in La Catedral?

Kike Sola: That’s the idea. We’re taking it one step and one match at a time. Obviously we have very tough matches, every game is different, every Sunday is a totally unique experience, but we have to be strong on our pitch no matter who the opponents are.