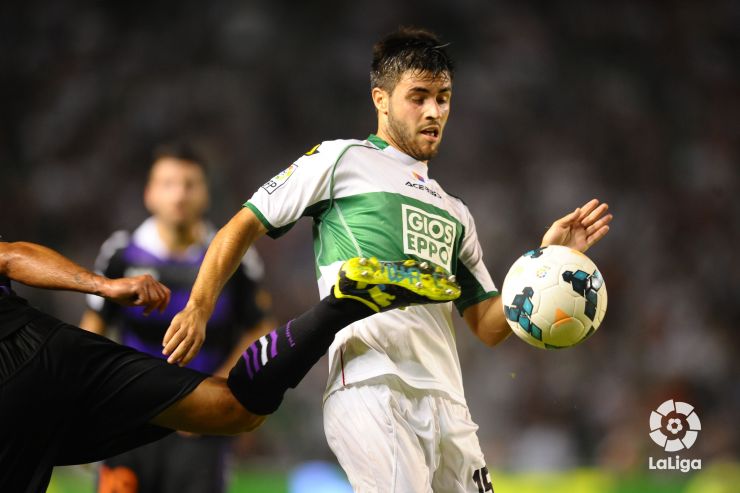 "I want to continue improving and what happens, happens"

Carles Gil is one of the Liga BBVA’s in form players. After a great season, which culminated in helping the Valencian outfit achieve promotion, he wants to continue growing. He sits down for an interview with lfp.es

Carles Gil is one of the gems of Valencian football. His self-confidence and speed on the ball have turned the midfielder (Valencia, 1992) into a fans’ favourite at Elche CF, where he was one of the team’s engines during last year’s Liga Adelante campaign. He has carried that form into the Liga BBVA. Gil is still one of Fran Escribá’s stalwarts and he sits down with LFP.es to look over the year and talk about his hopes for 2014. He has a bright future ahead of him.

LFP.es: This year has gone almost perfectly for Elche. How has it been for you?
Carles Gil: It was a great year because last season went almost perfectly. Everything went to plan. Starting this season in the Liga BBVA was a dream come true, and we want to continue on the same track this year.

LFP.es: What was Elche’s secret to getting promoted?
Carles Gil: The squad. All the players are extremely dedicated. That was the main reason. We also just focus on one game at a time, we enjoyed a good run at the beginning of the season but no one ever spoke about promotion.

LFP.es: From the outside it seems as though Fran Escribá is the main man behind the team’s structure. What sets him apart from other managers?
Carles Gil: The gaffer speaks very clearly, he’s very sensible, has a lot of common sense and knew how to communicate his ideas to us from the start. He wanted us all singing off the same hymn sheet and was able to get the whole dressing room to pull in the same direction. Because of that, things went really well for us.

Fran Escribá wanted us all singing off the same hymn sheet and was able to get the whole dressing room to pull in the same direction.

LFP.es: Despite your young age you are one of the team’s key men on the pitch. How do you deal with that responsibility?
Carles Gil: Fairly well…since coming here I’ve been treated really well. I adapted quickly to the team and the city thanks to my teammates. I feel very comfortable here knowing that I have to keep growing and doing the best I can. I’m very grateful to Elche, the fans and the city as a whole.

LFP.es: Last season you also managed to make a name for yourself, which could perhaps open up the possibility of return to Valencia. Is that how you see it?
Carles Gil: My intention is to do things well here in order to help the team achieve its goals. I’m on Valencia’s books and I know they are following my progress and waiting to see how I do, and for that I’m grateful.

LFP.es: How would you describe Elche?
Carles Gil: It is a local club, where we all know and get on with each other well. No one is above anyone else, and that helps to make things go well.

LFP.es: Have you been keeping an eye on the Liga Adelante this season?
Carles Gil: It’s a different league compared to last year because last season there were just three or four teams that took a commanding lead very quickly. This year it is more competitive and tighter competition. The Liga Adelante has always been very tough and it is difficult for every team.

LFP.es: What is your fondest memory of 2013?
Carles Gil: Being promoted. It was incredible, the way the fans treated us was something very special.

LFP.es: The qualification process for the Under-21 Euros in 2015 continues next year. Do you see yourself making it into Julen Lopetegui’s plans?
Carles Gil: I was given a chance already although I wasn’t given many minutes to prove myself. There are a lot of top quality players in the team so I know I have to do really well with Elche in order to get another call up.

LFP.es: What are you hoping for in 2014?
Carles Gil: This season is all about staying up. Personally I would like to continue growing as a player, learning, improving and then whatever happens, happens.