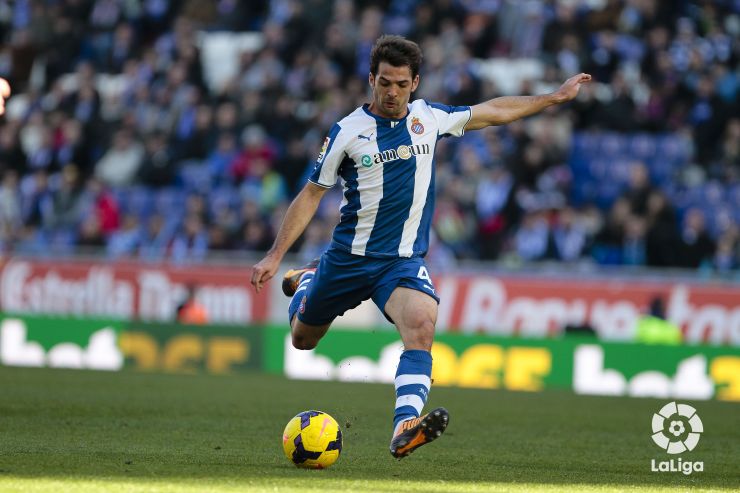 "I try to return the love to Espanyol every week"

Víctor Sánchez, the Catalonian club’s midfielder, is one of the catalysts of the Liga BBVA’s current boom. The player spoke exclusively to LFP.es about the blanquiazules’ current situation.

Víctor Sánchez Mata (8 September 1987, Rubí, Barcelona), RCD Espanyol midfielder, is a regular in Javier Aguirre's side in his team's great Liga BBVA season. After his spell at the FC Barcelona academy, he is now in the midst of his best year with the blanquiazules at 26 years of age.

LFP.es: You are currently in tenth place, what is the key to the great season you're having?
Víctor Sánchez: In our side every player has a clear idea of his role in the group that makes us a difficult team to play. We do not give up on a ball, which makes us very tricky to beat.

LFP.es: Your contract ends in 2015, what are your intentions for the future?
Víctor Sánchez: We are currently discussing a renewal. I am clear about staying here, the club are too I think, so I hope we can reach an agreement. Even so, I am in no rush, I have a year left, plus the rest of this reason, it will be gradual but I think we're on the right path.

LFP.es: What has Aguirre brought to Espanyol and what about Víctor Sánchez?
Víctor Sánchez: Above all, the keys to the game, a means of understanding football that is based on trying to commit as few errors as possible and making the most of those of the opponent. For us it is very important to know who what we are doing and to get good results. From there, things happen on their own.

LFP.es: What are the aspirations of the blanquiazules in the Liga BBVA?
Víctor Sánchez: We have six matches left, we are going to try and get as many points as possible, but we don't know if we'll reach the top seven or eight. The important thing would be to get three points this week, which would give us practical or mathematical safety; what we've been looking for all year. And from there we can focus on another goal, such as reaching 50 points, for example, which we have not got for years.

LFP.es: You've scored four goals and one of them was one of the best of the season, against Athletic Club, is it also one of the best of your career?
Víctor Sánchez: Yes, definitely. Above all because I don't usually get many, I normally scored one, two or three in a season. This year I've got four and I hope I can score more. It was a great goal, but above all because of what it meant, that thanks to my two goals and the one from Sergio, we managed to beat Athletic in a match that was very important for us because we were on a good run.

LFP.es: Sergio García is having a sensational season...
Víctor Sánchez: He is getting increasingly comfortable, and his role is gaining importance. When he arrived he did not play many consecutive matches, he had injuries and he found it difficult to get into the team. Now he has been playing at the same level for several seasons, taking him to the national side, he is comfortable, he knows he is an important member of the group and he gives us a great deal.

LFP.es: What is it like to have been at Barcelona and now play for the city's other team?
Víctor Sánchez: It is not difficult when you wear their colours and fight to the death for them. Espanyol has been great to me from day one, they treated me like one of them, regardless of my past, and what I try and do is give that back to them every week on the pitch. And I think the fans like me, they are very affectionate, which is nice.

LFP.es: Does being Catalan and playing in Catalonia help you fit in at Espanyol?
Víctor Sánchez: When you're at home, close to where you were born, with your people, your lifelong friends, it's very gratifying. Also when you start to have kids, your people will want to be with you to see them grow and that gives you confidence to do well and grow as a member of the team.