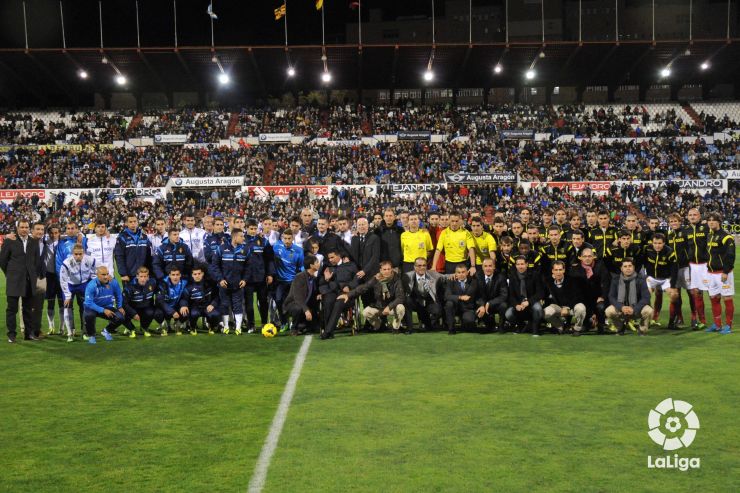 Fernando Cáceres expressed his gratitude for the tribute he received in La Romareda, saying that he ends an emotional week with more strength than ever to continue his fight.

An emotional few days, full of joy and excitement, were brought to an end with some words from Fernando Cáceres. The Argentinian shared his feelings of gratitude and satisfaction and spoke of the energy he has gained from a week culminating in the tribute match that will help pay for the rest of his recuperation.

The first thing he spoke of was his excitement about returning to La Romareda for the match between Real Zaragoza and the 'Amigos de Fernando Cáceres'. "I feel very happy, satisfied and content. I tried to put on a front, but I couldn’t. It was such a joy and a night to be enjoyed, which I did", stated the Aragon team’s old centre-back.

The stadium exploded when the Argentine took to the pitch alongside his friends Alejandro Martínez and Chema Sanjuán, but the ovation rang out even louder when Cáceres stood up from his wheelchair to take the honorary kick-off. "It was wonderful, I felt great. Stepping out onto the pitch was a great moment", he remembered, visibly moved.

His final statement was one of gratitude for all the affection he has recent in the past few days in Zaragoza from the club, the players and all the fans in world football who have sent messages of support to the Argentinian, but with particular emphasis on the city in Aragon. "I want to tell the people of Zaragoza that my heart and friendship is theirs. They have earned them through all the joy they have given me".

Those who took part in the match also wanted to speak of their memories of Fernando and the excitement of sharing the Romareda turf with him. Rubén Gracia 'Cani', born and bred in the city, was full of praise for the old centre-half. "When they told me, I didn’t hesitate for a moment. I wanted to come and help out". Villarreal CF’s current midfielder, who was a ball-boy in the stadium in Cáceres’ day, spoke of the 1995 UEFA Cup Winners’ Cup. "It was right in the middle of my time at Zaragoza. I’ve seen Fernando play a lot".

One of the central defenders in Paco Herrera’s current squad, Zaragoza native Víctor Laguardia, also wanted to say a few words about his experiences with Cáceres. "It is a pleasure to play in the tribute match for Fernando Cáceres, one of the great footballers to have played in the colours of Zaragoza, and to be able to show him our affection ", stated the player.