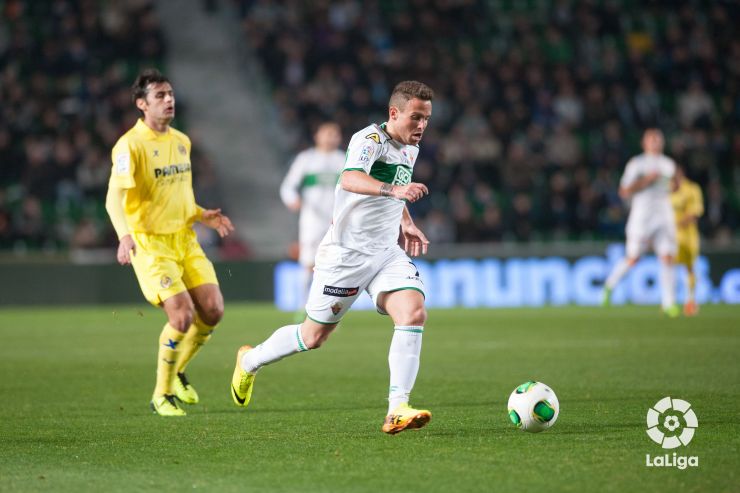 "I don't want them to draw. I want the one who deserves it to win”

Alcorcón central midfielder Jonathan Ñíguez will witness a very special day’s play this weekend as his two little brothers, Aaron and Saul, go head to head in the tie between Elche and Rayo.

In the Ñíguez household everything is ready for the big day. This weekend in Liga BBVA Elche CF forward Aaron and Rayo Vallecano central midfielder Saúl will take to the same field where their father José Antonio Ñíguez, 'Borja' as he was known, triumphed. The third brother, Jonathan Ñíguez, plays for AD Alcorcón in Liga Adelante, and will be watching the game on television, as his side play in Tenerife.

"This time I won’t be able to go and see them, but my whole family will be there supporting; they're all ready: parents, aunts, uncles and friends", said Jonathon. Nobody wants to miss a day that has long been circled on the calendar at casa Ñíguez in Elche. "It was a special day when they played in Vallecas in the first half of the season, but this time my brothers will play on home turf, where our dad triumphed. I don’t want to imagine how he will be".

Jonathan is the oldest of the second generation footballers from the family, and remembers that when they played between themselves, they used to come up with all sorts of anecdotes and fun bets during the week, "In the first game they played for dinner, and at the moment Aaron is losing, and he is to avenge the 3-0 result from the first game".

When asked to give his thoughts on the game, the Alcorcón central midfielder didn't hide: "I don't want them to draw, I want the one who deserves it to win. And of course I don't want them to get injured". He added, "as little brothers, they were trouble makers", but truth be told, Jonathan couldn't speak highly enough of the pair.

Aaron is 24 years old, and for his age has a large footballing CV, but it looks like he has found stability on the pitch at Elche. "I thought it might be a bit more difficult, but now I can see he's very much at ease. He's confident for the second half of the season, and doesn't think that they'll have a problem staying up", said Jonathon.

Saúl is a diamond in the rough. Aged 19, he has played for Spain's youth sides and lifted the UEFA Europa League and Copa del Rey with Atlético. "He's progressing incredibly. He's so young, meaning there's little pressure on him and that helps. I think he still feels like he's having a kick around with his mates", said his bother. In this game, both will have the chance to show their value in front of their family.