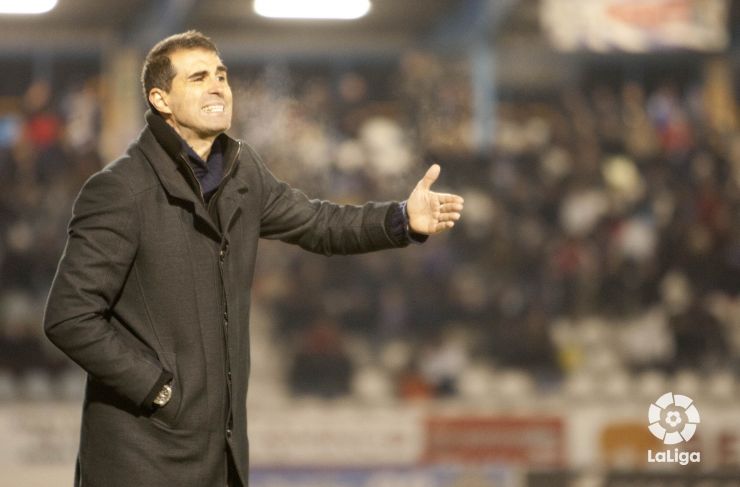 "Hard work and intensity are non-negotiable in our team"

LFP.es spoke to Gaizka Garitano about his time in the Liga Adelante, the keys to Eibar's success and the next match with Córdoba.

Gaizka Garitano (Bilbao, 09/07/1975) is in the midst of one of SD Eibar's greatest season in the Liga Adelante. The Basque coach has led his team to third place, immediately after coming up this season, and it is in the fight for the promotion playoff spots with RC Deportivo de La Coruña and Real Sporting de Gijón. However, it is not a new situation for him, as in the 2004/2005 season, he fell at the last hurdle on the road to the Liga BBVA as a player with the armeros.

LFP.es: You were a member of the Eibar team that came so close to promotion, what similarities do you see between that team and the one you manage?
Gaizka Garitano: The great atmosphere in the dressing room, all of the players' willingness to work and improve would be some examples. We are very happy about how things are going but we have to be careful because at the moment we don't even have enough points to stay up.

LFP.es: How are you finding such a great situation as a coach and how was it as a player?
Gaizka Garitano: Maybe I enjoyed it more before because I was playing. Now, from the sidelines, I try to help the players as much as I can and I am lucky to have very good and committed players. It is a different experience because I have always said playing is better, although I am enjoying this too.

LFP.es: You are one of the youngest managers in the division, but you have shown that it can be a guarantee of success, how do you do it?
Gaizka Garitano: The key is in having players that really help you. I am young, but I have been in football for my entire life, I have experience. But the key is the players. If we are doing well it is because they are doing well.

LFP.es: Which manager has had the greatest influence on you in terms of the challenge of coaching a team?
Gaizka Garitano: I have had a lot of very good managers. I have tried to learn as much as possible from them. I couldn't pick one out, although I have picked up more things from some than from others.

LFP.es: And of all those things, which is the most significant?

Gaizka Garitano: Hard work and intensity are non-negotiable in our team. The team is greater than the player and each player's personal issues come second. That is the most important thing about this side, the group.

LFP.es: What does Eibar aspire to this season?
Gaizka Garitano: We aspire to prepare for the Córdoba CF match as well as possible. The main goal is to stay up and we still need more points to achieve it. We have to think about Córdoba and try to maintain our form.

LFP.es: Is the secret to the team keeping the same core players?
Gaizka Garitano: This week I started eight players who were already in the team last year. It is one of the team's weapons, that we know each other and we know what we want, that is where the group's strength comes from.

LFP.es: Eibar is the team to have conceded the second fewest goals, is that the key to success in such a competitive Liga Adelante?
Gaizka Garitano: As we have just come up we know that our greatest strength has to be our defence. We have a good balance between goals for and against and that is something we showed in the Segunda Division B. In this division, if you don't have a solid defence it is difficult to survive.

LFP.es: How do you see the next match against Córdoba?
Gaizka Garitano: It will be very difficult as the division is tighter than ever. Córdoba is a team that is looking to go up, it has built a team to be at the top end of the table and one that is very strong at home. It will undoubtedly be a very tough match.