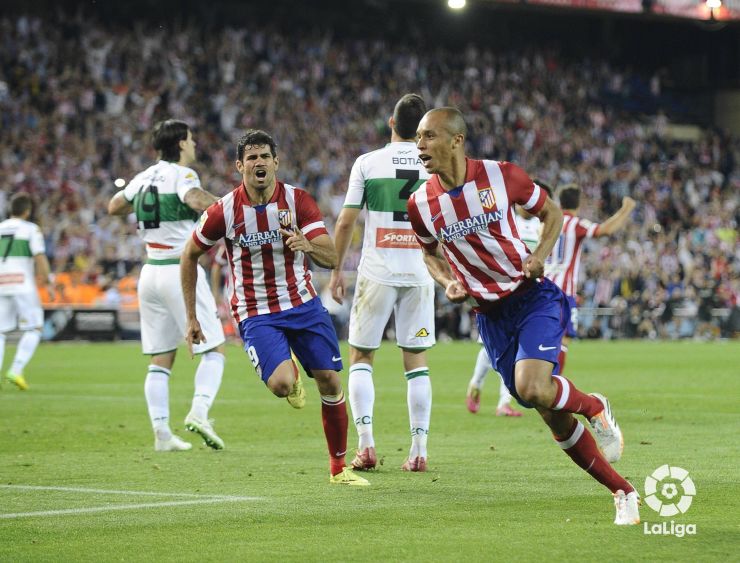 Hard-fought win for the leader

Atlético beat Elche 2-0 with goals from Miranda and Diego Costa, and their dream of conquering the Liga BBVA lives on for another week.

Club Atlético de Madrid beat Elche CF 2-0 on matchday 34 of the Liga BBVA. The result means that Diego Simeone's team stay at the top for another week, while Elche are still outside the relegation zone despite the defeat.

The first half saw chances for both teams. The rojiblancos dominated early on, creating danger in their opponent's box, although they were met by an Elche that was solid and well-organised in defence. However, as the clock ticked on, the visitors began to gain ground and ask questions of the rojiblancos, who managed to keep them out, largely thanks to Thibaut Courtois. The Belgian keeper stopped two great shots from the franquiverdes, fending off a long-range effort from Javi Márquez and a superb header from Cristian Săpunaru.

The visiting keeper, Manu Herrera, was equally impressive as the second half got underway, stopping a David Villa spot-kick to prolong the deadlock. However, Atlético kept their heads up and dictated a high tempo throughout the second 45 minutes, for which they were duly rewarded. João Miranda, with a header in the 72nd minute, and Diego Costa from twelve yards in added time, sealed an important win for the rojiblancos to keep their dream of winning the title very much alive.