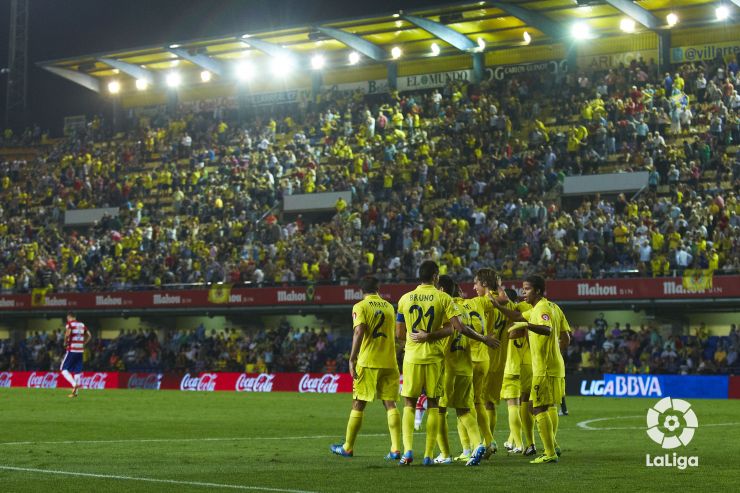 The Yellows currently sit fourth in Liga BBVA, and are showing positives signs after returning to the top level.

Four months after returning to Liga BBVA, Villarreal CF are one of the teams to watch right now. After eight games, Marcelino García Toral's side currently sit fourth, behind only FC Barcelona, Club Atlético de Madrid and Real Madrid CF, having played some offensive, attractive football to the delight of their fans.

Whilst it is commonly thought that the adaption to football in the top flight is complicated, Villarreal are bucking the trend back in a league where they were a mainstay over the past decade. With a reinforced side, but with the same teamwork and philosophy as last term, Marcelino's men have only lost once in the first eight games of this Liga BBVA season.

Villarreal's success can be seen in every position. Goalkeeper Sergio Asenjo, one of this season's new recruits, has only conceded seven goals until now - a figure only bettered Víctor Valdés (Barcelona) and Thibaut Courtois (Atlético), who have both conceded six. Coupled with this is a solid backline, marshalled by the likes of Mario Gaspar, Mateo Musacchio and the experienced José Antonio Dorado.

Another standout player is Cani. The central midfielder from Zaragoza is a shining light, helping the side's good play with two goals and four assists, and looks far from his 32 years of age. Those two goals have been vital for Villarreal this season, scoring the winner against Real Valladolid CF (2-1), and one of the goals in the 2-2 draw against Real Madrid CF.

Giovani dos Santos looks to finally be turning into the player many of us thought he would be following his signing. The Mexican has been outstanding, scoring four and setting up two, and is showing signs of becoming a real leader on the pitch. Up top, Jérémy Perbet and Jonathan Pereira have also chipped in with two goals each, meaning that the side from Castellón sit fourth with 15 points.

If this wasn't enough, The Yellows are yet to taste defeat at home in the Estadio El Madrigal. Here, Real Valladolid CF, RCD Espanyol and Granada CF have all come away defeated, whilst the great Real Madrid could only draw.

Added to all that, the academy is showing good signs, pointing to a positive future for the club. Players such as Moisés Gómez and Pablo Íñiguez, who has recently been called up to the Spanish U-21 side, are sure to make a big impression on Liga BBVA in the future.