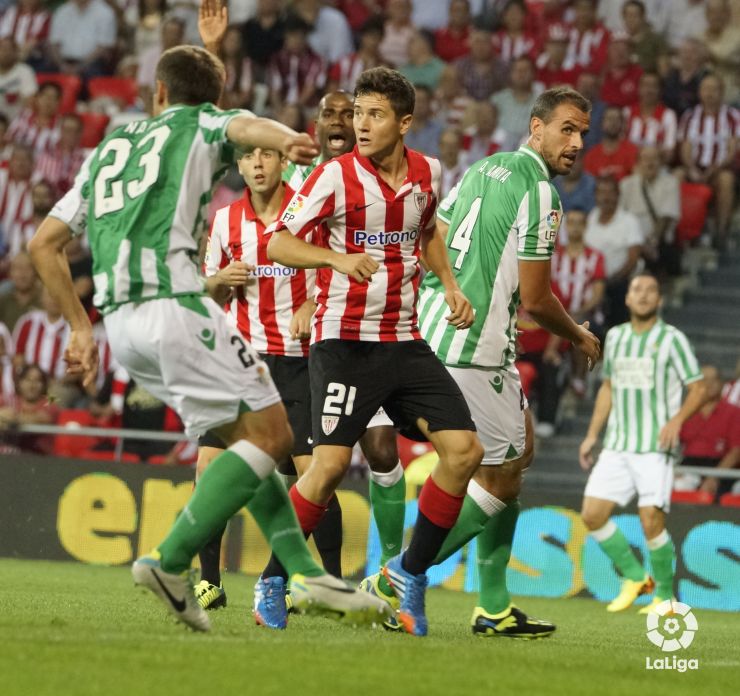 Ernesto Valverde’s men managed to turn round a goal deficit to defeat Betis 2-1.

On Thursday Athletic repeated the story of their first game at San Mamés, coming from a goal behind against Betis. Óscar de Marcos cancelling out Jorge Molina’s opener, before Mikel San José won the match for the home side.

After an even start in which Aritz Aduriz and Javier Matilla had the best openings for either side, Athletic took a firm grip towards the end of the half. First Ibai Gómez going close with an effort from long range, and then, on the stroke of half time, after Gómez was brought down, a strong header from Carlos Gurpegi also went agonisingly close.

In the second half, Athletic were more incisive, and a breakaway by Markel Susaeta resulted in a penalty after Betis defender Xavi Torres brought him down. Beñat Etxebarria was given the responsibility of taking the spot-kick against his old side, but Guillermo Sara saved to his left. The Argentinean goalkeeper was once again the hero for his team in the next phase of play, producing a top-drawer save from Susaeta.

Totally against the run of play, Betis opened the scoring. A cross from Lolo Reyes landed on the head of Jorge Molina whose initial header was saved by Iraizoz, but the forward was able to poke home the rebound from an impossible angle on the 63rd minute.

Athletic’s response was immediate. The introduction of Óscar de Marcos gave the Basque outfit more impetus and it was the central midfielder who secured the draw with a header from a Beñat cross.

Athletic pushed hard for a winning goal, which duly came nine minutes from time. After a corner that was cleared, Ibai Gomez put the ball back into the box, and a brilliant header from Mikel San José put Ernesto Valverde’s side ahead. Betis were unlucky not to equalise at the death as Molina hit the post.