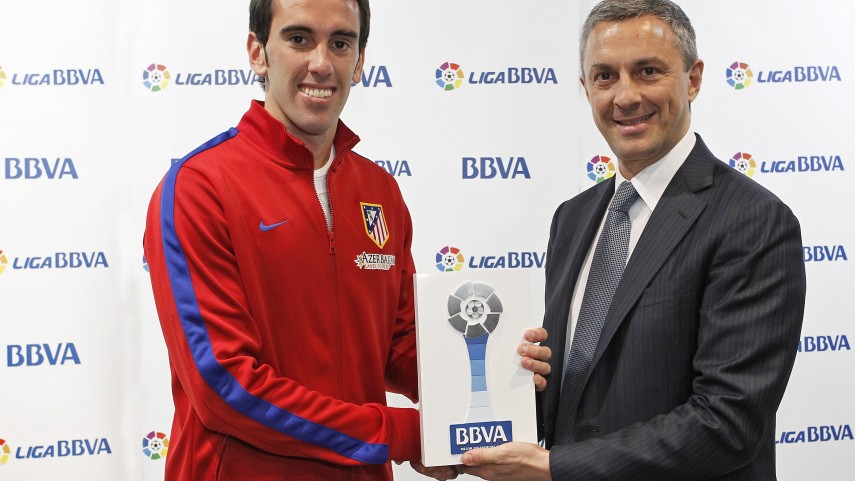 Godín, best player in the Liga BBVA in May

The Atlético defender will be awarded the prize for best player in the category after scoring the goal that earned the Rojiblancos the Liga BBVA title.

Diego Godín (b. Uruguay, 1986), the cornerstone of Club Atlético de Madrid and scorer of the decisive goal at the Camp Nou, received the BBVA Prize for the Best Liga BBVA Player this May, for the second time in a row. His solidity, strength, consistency and goal-scoring ability earned him the award.

The Uruguayan was very pleased with the prize: “I feel really happy to have won such an important prize in such a prestigious Liga BBVA, with so many good players involved”. And Godín added: “At a personal level I’m really proud. But it’s true that I couldn’t have won this personal prize without my team-mates, because we all make the effort”.

In August 2010 he arrived at Atlético, winning the UEFA Super Cup in 2010 and 2012, the UEFA Europa League in 2012, the Copa del Rey in 2013 and the recent and historic Liga BBVA. This campaign he continued with this form and also scored three important goals for his team that played their part in the Rojiblancos winning the title, like his score on Sunday at the Camp Nou. The Uruguayan has become an all-important player for Diego Simeone, starting all the matches he has been involved in.