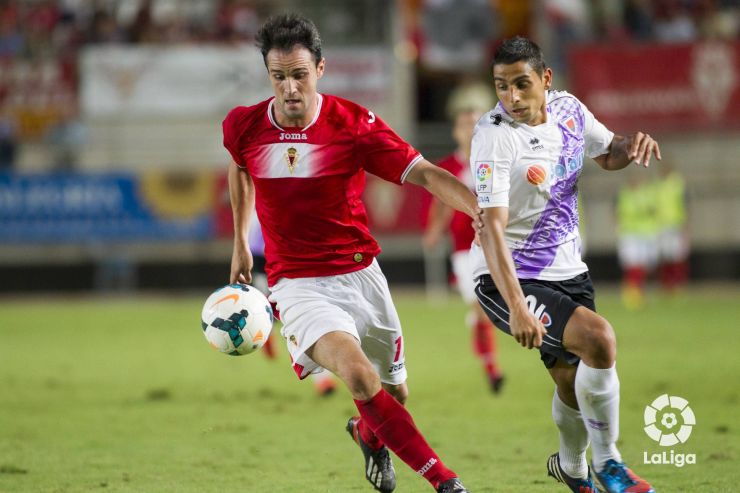 Šćepović, Kike, Fofo and Arana are the Liga Adelante's top four goal-scorers and it is by no coincidence that their teams currently fill the table's top spots.

A goal is the stuff dreams are made of, and the forward's position is always the one most closely watched by the fans during the summer transfer window. Strikers breathe energy into crowds and drum up the fans with every celebration.

After eight matches, the Liga Adelante's top four goal-scorers play for the division's top four clubs. Stefan Šćepović (Real Sporting de Gijón), Kike García (Real Murcia CF), Fofo (SD Ponferradina) and Manuel Arana (RC Recreativo de Huelva) are looking down on the rest of the list with eight, seven, six and five goals respectively, and their teams could not be more grateful. These goals mean that the clubs can dream of promotion to the Liga BBVA, an objective which is still a long way off with 34 matches left to play.

The Serbian Šćepović has scored a goal in every game he has played for Sporting and he has sparked new dreams at Gijón by helping the team to second spot, which is an automatic promotion place. The player from Belgrade is living his dream at just 23 years of age, but he will not be able to help his team against Real Jaen CF on matchday 9 as he has been called up for the Serbian senior team to play in the qualifiers for the 2014 FIFA World Cup in Brazil.

Stefan, with eight, has Kike nipping at his heels with his seven goals that make up nearly 50 per cent of the 15 netted by Murcia. The Mediterranean team are in fourth place, and Kike himself wants to make up for the two goals scored in the 3-2 defeat to Jaén, which did yield any points. On Saturday at 18:00, Murcia and its star striker will be looking to return to winning ways against Girona FC. Sporting is second on the list of goals scored, but the striker from Motilla de Planacar is having a dream season and is already a goal away from equally his tally from last year.

Ponferradina finished below the playoff spots on goal difference last season, and in the new league campaign they will be looking to go one better with the help of a Fofo who has found the net six times in the six matches he has played. Not having played matchdays five and six, the seventh was the only one in which he has failed to perforate the opponent's goal, but three weeks earlier he scored a brace against Sporting in the 2-2 draw. The side from El Bierzo is third and just one point from the automatic promotion spots, on Sunday it is due to visit the Romareda to measure up against one of the division's giants, Real Zaragoza. Fofo is a constant threat and has come on exponentially since failing to score last season.

Liga Adelante leaders, Recreativo de Huelva, are the division's top-scoring team and six of its 16 goals are the handy work of Manuel Arana. The attacking midfielder is having a dream debut season in Andalusia and he has scored every time Recre has, with a record of three wins and a draw. Also, the footballer from the Real Betis Balompié youth academy has scored more penalties than anyone.