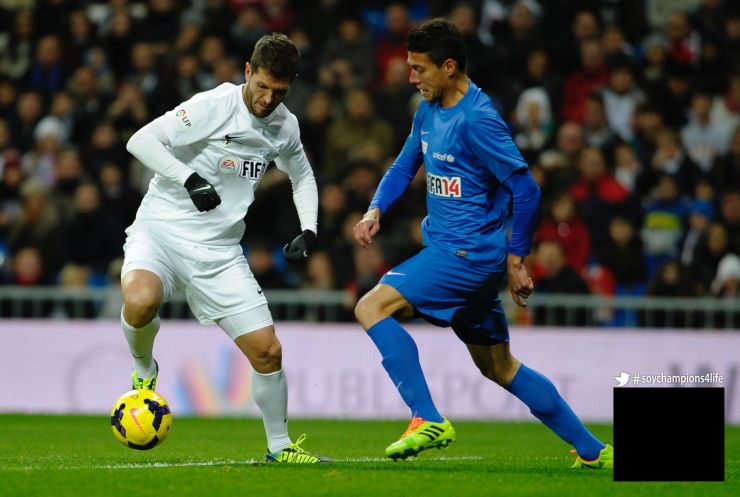 Goals galore during a successful 'Champions for Life'

The East team won 8-6 after a spectacular charity match that delighted young and old alike.

The 'Champions for Life' saw thousands of fans descend on the Santiago Bernabéu to be part of the charity match organised by the Fundación del FútbolProfesional, UNICEF and the Liga de FútbolProfesional. All the profits raised during the event went to help children who have been affected by Typhoon Haiyan in the Philippines.

In the first of three 30 minute long encounters between the East and West sides, which were made up of players from the Liga BBVA and the Liga Adelante, fans were treated to a 2-2 draw with an array of quality goals. The East team started off the strongest, but it was Celta Vigo’s ÁlexLópez who opened the scoring with a cracking strike from outside the box, which found its way into the top right-hand corner. The West team almost doubled its lead, first through a great attempted header by Quini and then when a Sergio Ramos shot was deflected onto the woodwork by Moisés Hurtado. But Paco Jémez’s team soon paid for its wastefulness when Pizzi struck a low shot into the back of the net in the 20th minute to equalise. However, Quini was eager to get his name on the 'Champions for Life' scoresheet, and the AD Alcorcón man did just that when he drove a left footed shot in to retake the lead for the East team (2-1). The first encounter finished with another spectacular strike, this time from Postiga who drew things level (2-2) before the break.

The East team flew out the blocks at the beginning of the second game and almost immediately took a 3-2 lead through Tomás Pina. Nonetheless, the West team was able to respond quickly when Yuri made it 3-3 while the fans in the Bernabéu performed a Mexican Wave. Chances came quick and fast, which in turn allowed the East team to score its fourth goal through Brahimi after a nicely worked one-two with Pizzi. Before the whistle drew an end to the second encounter, it looked as though Pedro León would once again level matters after Yuri found him with a great pass, however, his shot hit the post. Instead Ayoze Pérez widened the gap between the sides when he made the most of a fantastic back heel from Ángel Lafita to make it 5-3 for the East team.

The third and final 'Champions for Life' game was just as thrilling. With a lot of young players representing both sides, like Álvaro Morata, Jonathan Viera and Pablo Sarabia, there were plenty more goals in store for the charity match. Cedrick pulled it back to 5-4 for the West team right at the beginning, and then some great work from Lass Bangoura set up Sarabia to make it 5-5. The RayoVallecano player was involved in the West’s sixth goal, which Morata finished off. The East team cancelled it out 15 minutes later after some beautifully worked build up play was converted by Nauzet Alemán. A few seconds later Jonathan Zongo made it 7-6 for the Blue side, who came back from behind to finish the game out 8-6 winners thanks to another exquisite Nauzet goal. The 'Champions for Life' was a resounding success, full of goals.