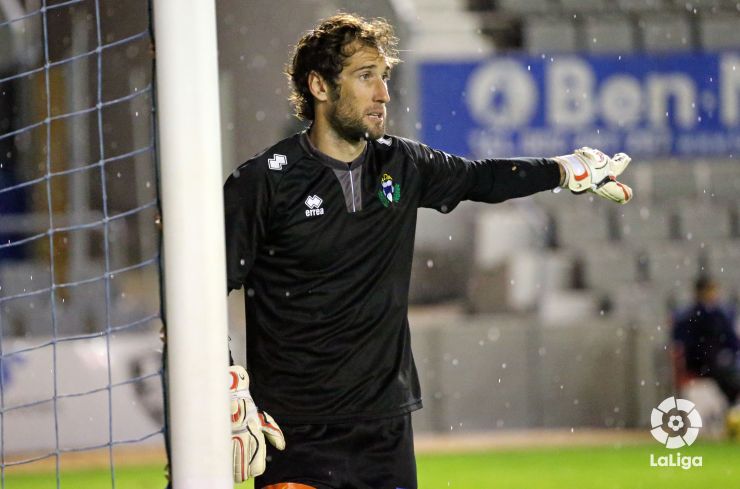 Giménez and Lux, two giants between the sticks

Alcorcón and Deportivo's keepers have conceded fewer goals that any other in the Liga Adelante, with just eight put past them in 14 Liga Adelante matches.

There are many stars twinkling in the skies above the Liga Adelante. The championship has always stood out for its great goal-scorers, who always seem to be looking for more records to break. It is also renowned for its solid and experienced defenders and skilful midfielders. However, people really look further back, to the goal, where keepers like Dani Giménez, of AD Alcorcón, and Germán Lux, of RC Deportivo de La Coruña, are also proving to be giants in the competition having conceded just eight goals each in 14 matches.

The Madrid side's keeper put on an exhibition of shot-stopping in his team's last match against CE Sabadell FC. The Yellows won 1-2 after a last-minute goal from Jean-Sylvain Babin, but it was Dani Giménez who had the final say in the result.

Sabadell won a penalty in added time that could have changed everything. However, Manuel Gato, something of a specialist from twelve yards, forced a sensational save from Giménez. The Catalonian side still had a bullet in the chamber for the rebound, but this time it was Paco Sutil who came up against another great stop from the keeper from Vigo to give Alcorcón three points. The match in the Estadio Nova Creu Alta was just one example of what Dani Giménez, a goalkeeper who has kept a clean sheet no fewer than seven times, is capable of.

His counterpart at Deportivo, Germán Lux, is having one of the most successful seasons of his career. On the 20th of October the Argentinian went down in the history of the Galician club by breaking Dani Aranzubia's mark of 415 minutes without conceding a goal, a record for the team in the 21st century. The 31-year-old keeper set a new target by playing 460 minutes without being beaten in the Liga Adelante.

In addition, 'Poroto', as the player is known, has played eight matches this season without having to pick the ball out of his net. There is no doubt that his performances have helped Fernando Vázquez's team to reach the second position they currently occupy, and to dream of a return to the Liga BBVA.