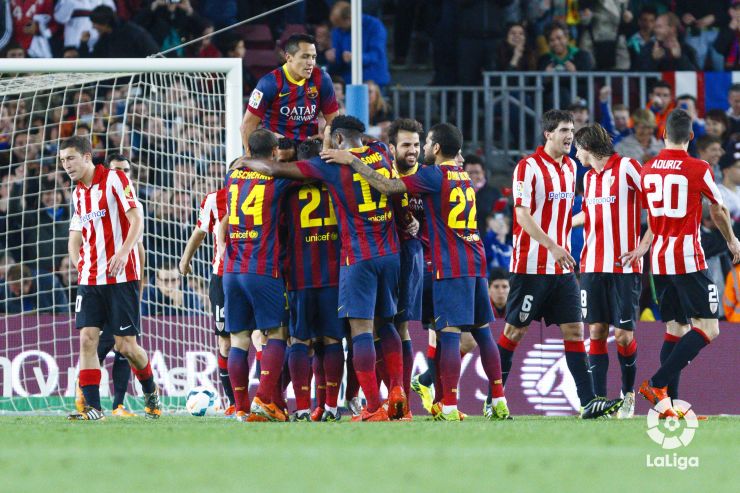 From trailing to winning in two minutes

Pedro and Messi turned things around in a match where Athletic took the lead through Aduriz.

Two minutes were all that was needed for Barcelona to wrap up all three points against Athletic Club during matchday 34 of the Liga BBVA. The 2-1 victory ensures that Barça remains in the title race while the Basques' lead over their closest rival for a place in next seasons UEFA Champions League, Sevilla, has now been shortened.

José Manuel Pinto and Gorka Iraizoz were the real stars during the first half and kept the fans entertained with a string of fine saves. Barcelona bombarded the Athletic goal mouth, but a great performance by the Bilbao goalkeeper, as well as some good fortune, kept the likes of Alexis Sánchez, Pedro Rodríguez and Xavi Hernández from finding the back of the net.

The second half was a completely different story though. Aritz Aduriz put the Lions ahead with a right-footed strike, but then Pedro Rodríguez and Lionel Messi dispelled any doubts lingering over the home side during the opening 45 minutes. Dani Alves had a big part to play in the build up to the Canary Islander’s goal, while the Argentine got the winner from a free kick on the edge of the box to turn things around for the home side in just two minutes.