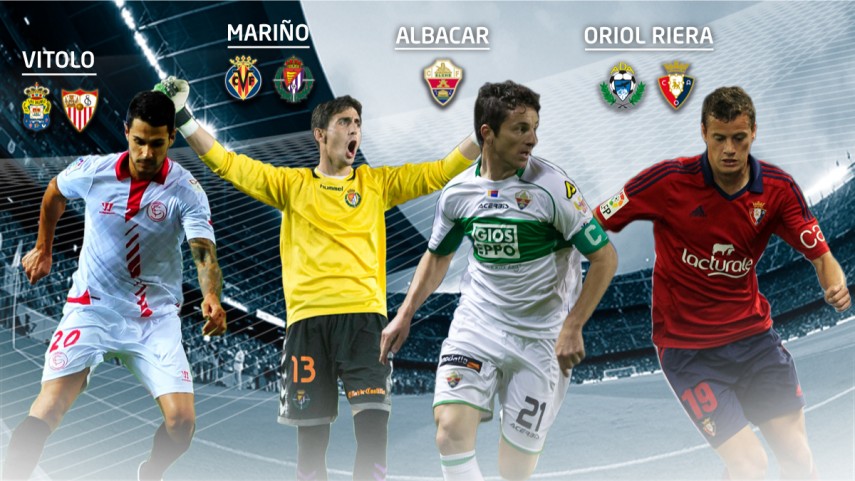 From the Liga Adelante to the elite

The 2013/14 Liga BBVA season is littered with some of the best players from last year's Liga Adelante.

Oriol Riera, Jesús Manuel Vázquez 'Chuli', Jesé Rodríguez, Víctor Machín 'Vitolo', Jairo Samperio, Manu Lanzarote and Charles Dias are just a few of the players who are enjoying the Liga BBVA this season having impressed in their respective teams last year in the Liga Adelante.

The top-flight now includes many of the second division's strikers, especially noteworthy is RC Celta de Vigo striker Charles, whose 27 goals last season, have earned him a place in Luis Enrique's starting eleven. But the Brazilian was not the only player to turn heads in the 2012/13 season.

The list of great players also includes its fair share of midfielders. Sevilla FC players 'Vitolo' and Jairo; and Manu Lanzarote, currently at RCD Espanyol, head a list of players who won their pass to the Liga BBVA in style. The Canary Islander was one of UD Las Palmas' stars last season, scoring 15 goals, while Lanzarote got one fewer for CE Sabadell FC. For his part, Jairo is demonstrating his quality under the orders of Unai Emery having left Real Racing de Santander.

That leaves the defenders and goalkeepers, where we can also find several players who fit the bill. David Lombán, who served in the ranks of FC Barcelona B last season, has been a stalwart in Elche CF's rear-guard together with Edu Albacar, in one of the teams who were recently promoted to the Liga BBVA. The Argentinian Sebastián Dubarbier of UD Almería and Nacho Fernández of Real Madrid, also won their place in the top flight thanks to their performances last season.

Between the sticks we have Diego Mariño. The now Real Valladolid CF player arrived at the blanquivioletas and immediately won himself the number-one shirt. Despite not contributing much to Villarreal CF last season, Mariño has been one of the surprise packages of 2013/14.

All these players have something in common: they have all come to the Liga BBVA having left their mark in the ultra-competitive Liga Adelante. Goals, skills, pace and power are just some of the characteristics that have earned them a place among the elite of Spanish football.