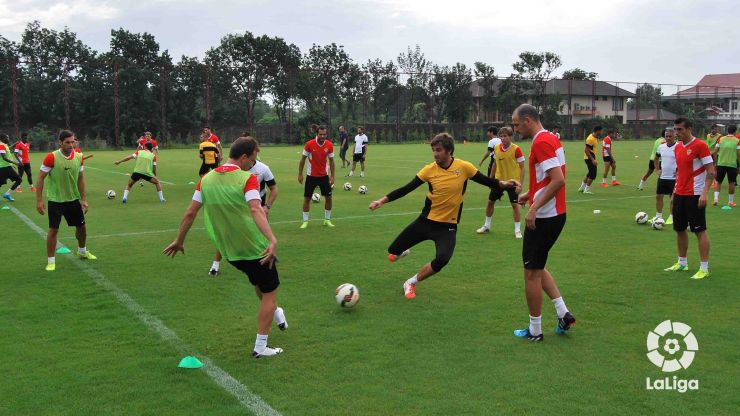 UD Almería completed an early morning training session at the SCG Stadium after Wednesday’s game against Muangthong United FC, with whom the Andalusian side drew 1-1.

After a talk from manager Francisco Rodríguez, the players stretched and did a series of recovery exercises in a light session that lasted around an hour and a quarter. The only absentee was Teerasil Dangda, who had the permission of the club.

At the end of the session, Ángel Trujillo spoke of the side’s tour of Thailand thus far. "The first days were adapting days. Now we’re getting there all the time and with every day, and every session, we are getting into the physical shape that we want. We are feeling the love of the people, the Thai people are very helpful and we’re very grateful to them", said the Madrid-born defender.

Teammate Fran Vélez also said the tour was very effective preparation as UD Almería are getting ready for their first game of the season: "we're learning a lot, it's very hot and this helps us improve our physical levels. To have come to Thailand is something very positive".

Also, the side received a visit from Joseba Ituarte, the club's former player and goalkeeper coach, who recently left the same position at Muangthong United, who wanted to say hello to the side, especially Francisco, who was his former teammate.

In the rest of the day, the Andalusian squad enjoyed a break, and the players took the opportunity to get to know the city of Bangkok and Thai culture. On Friday, UD Almería will once again train at 08:00 local time, and at 18:00 as they prepare for their game against Phuket FC, which will be played on 6 August at 14:00.