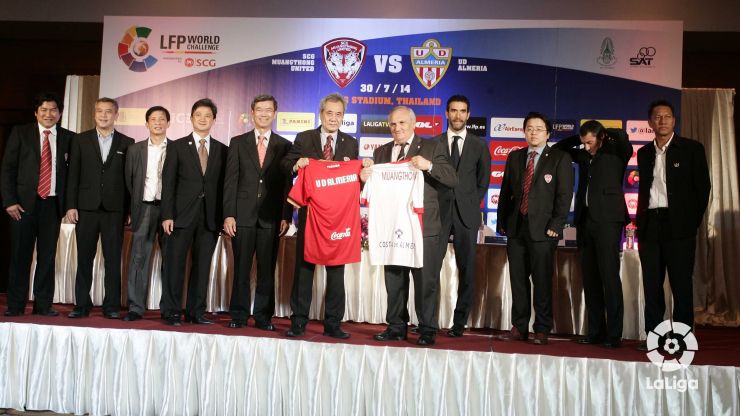 Fernando Sanz: "The reception has been wonderful"

The Liga de Fútbol Profesional ambassador to Southeast Asia attended the welcome ceremony for Almería as part of the LFP World Challenge Tour. The chairman of the Andalusian club and big stars of the sport in Thailand were also present.

Hotel Novotel Bangkok Impact hosted the welcome ceremony of the LFP World Challenge Tour in Thailand, in which UD Almería are taking part, with great media fanfare to witness the opening of the event organised by the Liga de Fútbol Profesional.

Fernando Sanz opened the event by saying that "The Liga de Fútbol Profesional is extremely happy and proud to be in Thailand. The reception has been wonderful. All the country’s media, fans and authorities have gone out of their way to help us".

The LFP ambassador also underlined the "total success" of the tour also involving RC Deportivo de La Coruña, Málaga CF, Valencia CF and Club Atlético de Madrid in the rest of the world. "The LFP World Challenge is taking place in countries that are strategically very important for Spanish football. We hope it will be the first of many visits that Spanish teams make to Thailand", said Fernando Sanz.

In addition, Thai authorities were full of praise for the recent signing of Teerasil Dangda. "For many years we have been looking for a player who could play in the Spanish league and Teerasil is our hope. We are very proud that he is the first Thai player who can take part in the top tier of Spanish football", explained the representative of the Thai Government’s Department of Sport.

The chairman of the Thai Premier League, meanwhile, expressed his certainty that the game between Muangthong United and Almería would have a big impact. "The Spanish Liga is the best league in Europe and the Thai league is number one in South Asia. We expect it to be a great success", said the spokesman for the Thai Government’s Department of Sport.

The Almería chairman, Alfonso García, was in charge of bringing the speeches to a close. "Almería are proud to be representing Spanish football in Thailand. The more spectators, the better it will be for Almería, for the LFP and for Brand Spain". The head of the Andalusian club also expressed his excitement at the arrival of Teerasil Dangda. "He is a player who can contribute a lot to the team", he concluded.