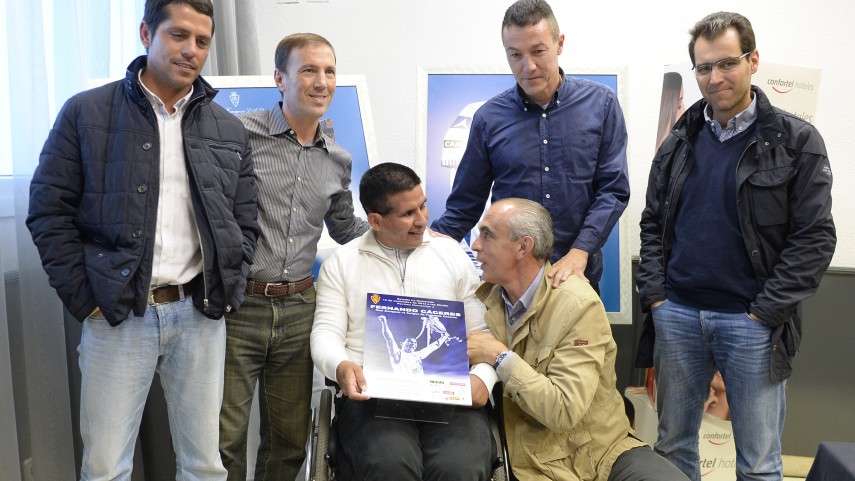 The former Zaragoza, Celta, Valencia and Córdoba player has felt the effect of everyone before his tribute match.

Fernando Cáceres is now in Zaragoza, counting down the hours until he returns to La Romareda. The tribute match between the Real Zaragoza first team and the ‘Friends of Fernando Cáceres' (Wednesday, 20:30) will have a range of old teammates, rivals and compatriots of the former centre back, who also played for Valencia CF, RC Celta de Vigo and Córdoba CF. All of the proceeds will go towards the cost of treatment that the Argentine is receiving after being shot in 2009.

Cáceres, surrounded by the game’s organisers and old Real Zaragoza teammates, demonstrated his delight and emotion with regards to Wednesday’s match. "It’s difficult for me to find the words or phrase to define the enormous delight that returning to Zaragoza and playing a tribute match gives me. I thank everyone who has made this game possible. For me it’s an enormous pleasure", said the Argentine.

One of the organisers, Alejandro Martínez (from Alejandro Moda) stressed that despite the fact 10,000 tickets had already been sold, the objective is to sell another 10,000 before the day of the match. Cáceres, who was with old teammates from Real Zaragoza (Xavi Aguado, Alberto Belsué, José Luis Rodríguez Loreto, Andoni Cedrún and Santiago Aragón), joked with them, something the ‘Negro’ was renowned for during his career. "The chair, as my wife said, is a trophy from the grand battle within the war that I’ve had. But the chair on its own I take not only because of the accident, but also for two names Xavi [Aguado] and Andoni [Cedrún], because I have to do their running on the pitch", he said as his friends laughed.

Tickets costs €5 and can be bought from the following sales points (see article), and all of the proceeds will go towards paying for the treatment that Fernando Cáceres is undertaking to aid his recovery. After the match there will be a beneficiary dinner in honour of the Argentine, which many more of his former teammates will attend, such as José Aurelio Gay and Ángel de Juana 'Geli', whilst other such as Juanmi and Gustavo Poyet are trying to change their schedules in order to attend. 'La Caixa', for their part, has put in place a Row 0 for those who wish to contribute more, and the charity 'La Caixa' will sponsor the shirts worn by the 'Friends of Fernando Cáceres' team.