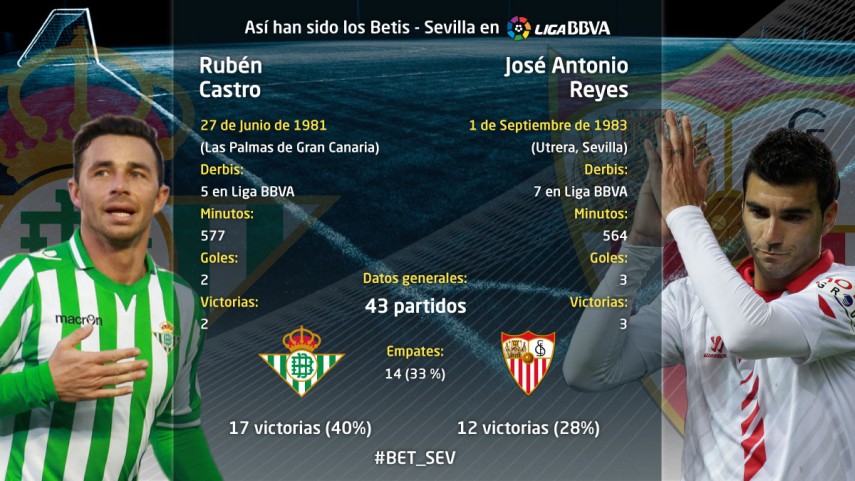 Facts and figures about the Seville derby

It will be the 110th meeting between Betis and Sevilla when both sides meet at the Benito Villamarín.

The essence of football is in the big games, and the tie between Real Betis Balompié and Sevilla FC is one of those. It will be the 110th chapter of the Seville derby in all competitions when the sides face each other in round 33 of Liga BBVA at the Estadio Benito Villamarín. From the first encounter in the Copa del Rey during 1927/28, the balance is 49 wins for Sevilla, 34 for Betis and 26 draws.

DID YOU KNOW… In the last four meetings at the Benito Villamarín, three of them ended as draws.
Sevilla last won on Betis’ home turf in Liga BBVA o the 11th of May 2008 thanks to goals from Luis Fabiano and Federico Fazio in a 0-2 win. Meanwhile, a few weeks ago in the round of 16 in the UEFA Europa League, José Antonio Reyes and Carlos Bacca put the tie back in the hands of Unai Emery’s side in what was the sides’ first ever meeting in Europe.

DID YOU KNOW… The most common result between the sides in Liga BBVA at the Benito Villamarín is 0-0?
There have been six goalless draws between the sides. The equality between the two city rivals is the tonic for derbies, as neither wants to lose to their rival and give any ground.

DID YOU KNOW… Betis haven’t won any of the last seven derbies at home in all competitions, dating back to a 2-1 win in 2006 (four draws and three defeats)?
Eight years have passed since Betis, then managed by Lorenzo Serra Ferrer, beat Sevilla, who were lead by Juande Ramos. Roberto de Pinho and Fernando Varela sealed the last Green and Whites win in front of their home fans.

DID YOU KNOW… The players who have played in the most derbies for each side in Liga BBVA are Rubén Castro (5) and Reyes (7)?
Two key men for their sides, Castro and Reyes represent better than anyone what the colours and love of your shirt means. The Canarian forward has been the Betis side’s goalscorer in the last few seasons, whilst the Sevilla ‘19’ has given some outstanding displays on the left wing at the Nervión, making him a key player and a reference for future generations.