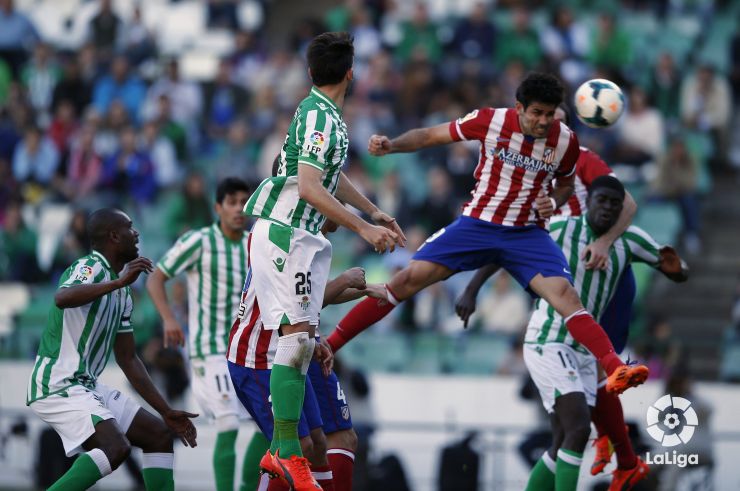 Experts in front of goal and the white board

Thirteen of the Red and Whites’ goals during this Liga BBVA campaign have come from training ground moves, while 19 have come from dead ball situations.

If there is one weapon that has typified Atlético Madrid and Diego Simeone’s strengths this season, it is the white board. Tactics, preparation and tireless strategic work have served the team especially well this year. Testament to this lays in the 13 goals the Red and White faithful has been treated to as a consequence of the manager’s in-depth analysis of opponents and his players’ ability to carry out his orders.

Elche, Granada, Real Sociedad, Levante, Villarreal and Rayo Vallecano are just a few teams that have fallen victim to Atleti’s ability from dead ball situations. During the current Liga BBVA campaign the Madrid outfit has hit the mark from well-rehearsed corners, as Sevilla can attest to, training ground moves, as was the case against Valladolid, and from the penalty spot, where they have found the back of the net on 19 occasions.

There is no doubt that while Simeone is the mastermind behind this new project, the squad is vessel acting out the Argentine’s vision. The Atleti players have been able to re-establish themselves as a team and become stronger and more compact as a unit thanks to an equal mixture of unity and diligent preparation. The players have developed a great understanding of each other on the pitch, something that is reflected in the results and, most importantly, on the league table.

The Manzanares outfit has scored 74 times in the league this season, and almost a third of those goals have come from dead ball situations. A historic achievement for a club that is enjoying its most prolific season in front of goal since the 1996/97 campaign, when they scored on 109 occasions in all competitions.

Raúl García, David Villa and, above all else, Diego Costa have benefitted most from these tactics, with all three players racking up impressive goal tallies as a result of well-worked training ground moves. The five goals by the Navarran midfielder, as well as the plethora scored by the Spanish-Brazilian forward, perfectly showcase the Red and Whites’ ability to read between the lines.

On top of that, Koke has been one of the top assist makers in the division thanks to his knack for taking free kicks and involving himself in build-up play. Special mention should also go to José Sosa, Diego Godín and João Miranda, three hugely important components to this route one strategy.