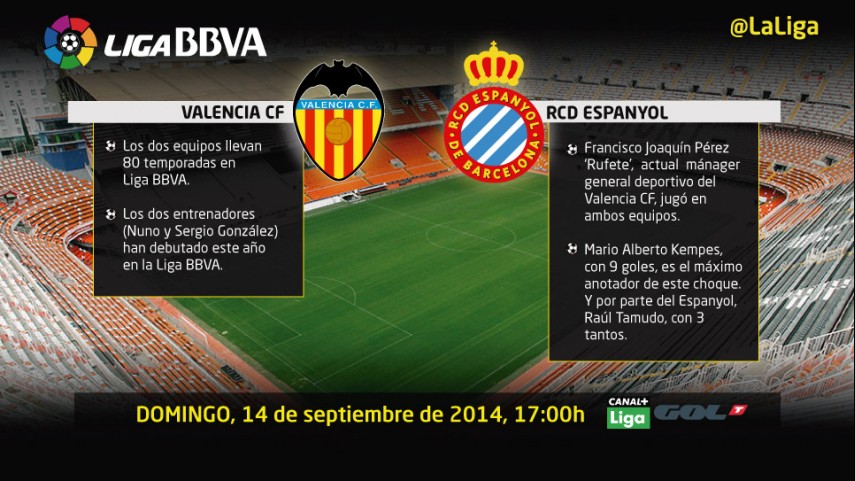 Exciting Valencia go up against Espanyol

Nuno’s side will be looking to confirm their good form against a Catalan team that travels to the Mestalla aiming to earn their first victory of the season.

The exciting start to the season for Valencia CF, with a draw and a victory on the first two matchdays, contrasts with a RCD Espanyol who have a single point and will be keen to claim their first victory at the Mestalla Stadium. The home side’s manager, Nuno Espírito Santo, like his counterpart in the Catalan dugout, Sergio González, is experiencing one of his first matches as his team’s boss in the Liga BBVA.

Team news
Valencia’s Portuguese manager will be without one of his big signings of the summer, Álvaro Negredo, who is still recovering from a fractured metatarsal. Rodrigo De Paul, meanwhile, is unavailable through suspension. For the Blanquiazules, Sergio will be without the Mexican centre back Héctor Moreno, who has yet to recover from the fractured tibia he suffered last season, and without Juan Fuentes, for personal reasons.

Thoughts from the dugout
"It’s important to win, but I like winning with identity", said the Valencian manager Nuno in reference to the style of play he wants for his team. The Catalan boss, meanwhile, believes that "the group deserves a victory" and that the win “is needed” to boost their morale going into the coming matchdays.

The world could stop, and online betting would keep going. Level at the break or more than three goals?

In three of the last four clashes between Valencia and Espanyol, the match was level at half time. If they are level at the break at the Mestalla, the odds are 2.10.