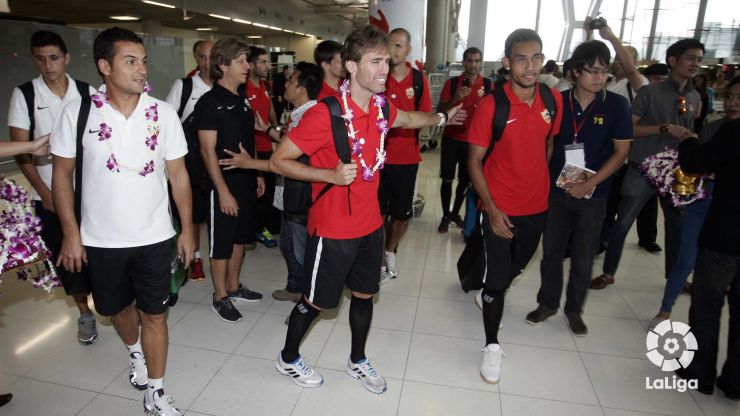 Excitement as Almería arrive in Thailand

The Andalusian outfit received a warm welcome from a large media pack that was awaiting the arrival of Thai star Teerasil Dangda.

UD Almería are now in Bangkok to take part in the second LFP World Challenge Tour, a project set up by the Liga de Fútbol Profesional with the help of ICEX. The Andalusian club is participating in this innovative project in which other clubs like RC Deportivo de La Coruña, Málaga CF, Valencia CF and Club Atlético de Madrid have also benefitted.

After landing in the Suvarnabhumi airport, the team was greeted by a large media pack. The players were also bestowed with traditional Thai gifts as they left the terminal. The excitement among those present was palpable, with special attention being focused on the team’s recent signing, and Thai star, Teerasil Dangda, who looked thrilled with the massive welcome.

Almería's captain, Miguel Ángel García 'Corona', expressed his impressions about the team’s arrival: "We are very flattered for the love they have shown us. We know that we are ambassadors for the Liga BBVA in Thailand and we want the Thai people to be left with a sensation of what the Liga BBVA and Almería are about. We have to partake in this project the LFP has set up, and which will be of benefit to all of us. It is good that the Liga BBVA is becoming more well known and is gaining more fans around the world".

Francisco Rodríguez's men will play two friendlies during their time in the Southeast Asian country. Their first match is in the SGC Stadium against Muangthong United FC, Teerasil Dangda’s former club, (30 July, 14:00 CET). Following that, they will fly to Phuket to take on Phuket FC on 6 August, 14:00 CET.

Among the media events surrounding the LFP World Challenge, the Spanish badminton team will visit the Almería squad and then play an exhibition match against Thailand, led by the current women’s singles World Champion Ratchanok Inthanon. Additionally, before the friendly against Muangthong United, the ‘Spain Experience’ event will be held in which some of the biggest Spanish and Thai entrepreneurs will come together in the capital city.