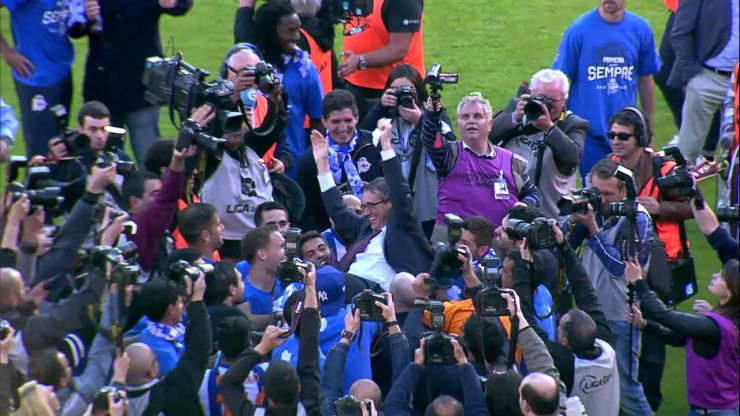 Excitement and drama to the end

With just one matchday remaining in the Liga Adelante, six teams will fight for the play-off spots and eight will do battle to avoid relegation.

Not for the faint-hearted. That's what the last matchday of the Liga Adelante promises to be, the final episode in a competition that has been vibrant from beginning to end.

After SD Eibar achieved glory last weekend, winning promotion to the Liga BBVA for the first time in their history, this Saturday it was RC Deportivo de La Coruña who bought their return ticket to the elite with a 1-0 win over Real Jaén CF. However, the two teams will play next weekend to put the finishing touches to their excellent campaigns by claiming the title of Liga Adelante champions. The Basques, with 70 points, will visit CD Numancia; the Galicians, with 69, will face Girona FC.

Though the top two places have already been decided, the fight for the play-off has not lost one iota of suspense. Real Murcia CF, Real Sporting de Gijón, UD Las Palmas, Córdoba CF, RC Recreativo de Huelva and CE Sabadell FC will battle it out for the four promotion play-off spots to become the third team to climb to the Liga BBVA. Especially intense will be the clash between immediate challengers Sabadell and Recreativo at the Nova Creu Alta Stadium.

Matchday 41 also witnessed the first tragedy of the season. Hércules CF beat CD Mirandés 1-0 through an Adrián Sardinero goal, but victories for Real Madrid Castilla and RCD Mallorca condemned the 'Herculean' team to relegation. Aside from the Madrid reserves and the Balearic side, who will be able to breathe momentarily, sitting outside of the relegation zone with 50 and 49 points respectively, another six teams will be playing for their future next weekend. Girona, Deportivo Alavés and Jaén, level on 48 points, are currently occupying the three places that everyone wants to avoid. CD Lugo (51), SD Ponferradina (51) and Mirandés (50) are the three sides who will have to fight for survival.

The deciding round of the Liga Adelante will begin on Saturday 7 June at 6.30 pm with nine fixtures kicking off simultaneously, while the CD Numancia-Eibar and AD Alcorcón-Real Zaragoza games will bring the championship to a close on Sunday 8 June at 6 pm and 6.15 pm respectively.