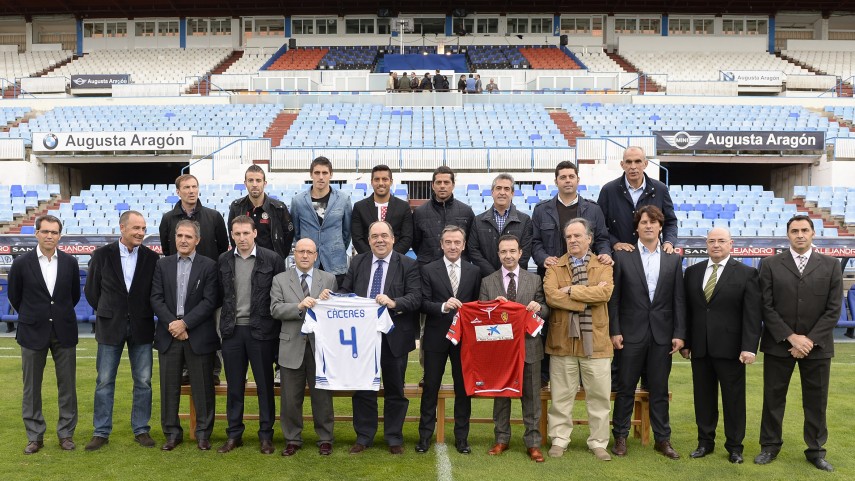 Everything ready to pay homage to Cáceres

Tickets cost €5 and are available from various sales points in Zaragoza.

The football world is ready for the tribute match that Real Zaragoza will play in honour of Fernando Cáceres on Wednesday the 13th of November at 20:30. La Romareda will be full in order to pay homage to one of its idols, who will be accompanied by players and teammates who do not want to miss the opportunity to share the love and respect that the Zaragoza faithful will show to the Argentinean.

Tickets can be bought for a special price of €5. Also, every fan who buys a ticket will be able to take a child aged 10 or under with to the game them for free. The gate receipts will go towards paying for the treatment that the former player is undertaking after being shot in Argentina in 2009. 'La Caixa', for their part, have prepared a Row 0 for those who wish to collaborate and also, the charity foundation 'La Caixa' will sponsor the shirts worn by the team ‘Friends of Fernando Cáceres'.

The match will see Real Zaragoza take on a combined team of current and former Argentinean and Spanish players from Ligas BBVA and Adelante. This is the case of Xavi Aguado, one of the players who will be involved greatly in this homage due to the years he shared a dressing room with Cáceres. Not only players connected with the club have collaborated with the match. Real Madrid player Cristiano Ronaldo has sent his support through Twitter, as has Athletic Club's Ander Herrera, whilst Gabi Fernández, Diego Pablo Simeone (Club Atlético de Madrid), Ángel Lafita (Getafe CF) and José Manuel Pinto (FC Barcelona) will all be at the game.

The website of Real Zaragoza informs of the following points and hours of sale for tickets: