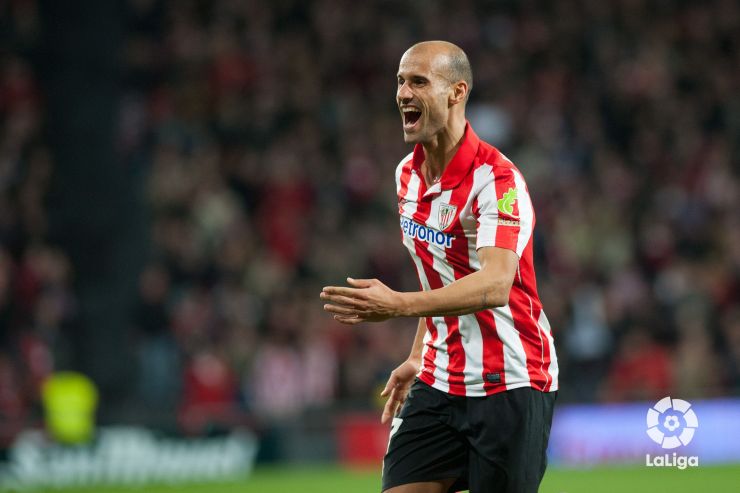 "Every Basque who enjoys football dreams of playing for Athletic".

Mikel Rico, the Athletic midfielder, speaks to LFP.es about his first four months with the Lions and team’s incredible form in the new San Mamés.

Mikel Rico (Basauri, Vizcaya, 4/11/1984) returned to Bilbao to live out one of his boyhood dreams, playing for Athletic Club. In just four short months the 29-year-old has established himself as one of the stalwarts of this new look Athletic, which is managed by Ernesto Valverde. The sky is the limit for the Basque midfielder and with a fourth place in its sights, Rico is enjoying the great run which sees the team still unbeaten in the new San Mamés.

LFP.es: Despite having a totally new look team after some big name departures and new arrivals, including that of the new manager, Athletic still looks strong. What is the secret to this team always competing in the upper end of the table?

Mikel Rico: Athletic is a special club, its different [to other teams] and there’s an onus on the players to give their all here. Feeling an affinity to the club could be one of the key reasons for the team always being near the top of the table.

LFP.es: How does Athletic attract so many local players?

Mikel Rico: An affinity towards Athletic is something that starts from a very young age. Every Basque who enjoys football dreams of playing here. It is a privilege, and as the club is made up of local people, you can really relate to the way things are done here and the whole outlook of the club. It is a club in the proper sense of the word, with incredible facilities and a huge social presence; people always come to watch the training sessions. Everything Athletic represents, the feeling, the experience, makes it completely different to other clubs.

The magic is still there. The fans are right on top of you, you can hear them clearly. Just when you think you have no more, the fans lift you up and give you that extra push which you didn’t have before

LFP.es: It can’t be easy but you have now played 15 games for Athletic, 13 games since the start of the Liga BBVA campaign. How have you bedded in so quickly?

Mikel Rico: My teammates have made my integration to the team really easy, as it’s usually a bit difficult when you’re the last one in. Then it’s about quickly assimilating what the manager’s plans are and trying to help him achieve them. At the moment I’m playing quite consistently and hope to be able to prove him right for the confidence he’s shown in me, on the pitch.

LFP.es: Ernesto Valverde has been the one showing his confidence in you. What is 'Txingurri' (the Ant) like as a manager?

Mikel Rico: Ernesto is a very normal coach, which is something that is becoming rare to find these days. He is a good communicator and he used to be a player, which is also of benefit to us.

LFP.es: What is it about the new San Mamés that has seen the team get such good results? Is it as inspiring as the old stadium?

Mikel Rico: San Mamés is San Mamés. The magic is still there. The fans are right on top of you, you can hear them clearly. Just when you think you have no more, the fans lift you up and give you that extra push which you didn’t have before. The confidence that comes from going undefeated helps you pick up good results, it gives you a boost. Hopefully the good results continue.

There are differences between the two stadiums because one is very modern. It is different, but with respect to what Athletic wanted to preserve – that all the noise stay trapped in the stadium, that the fans get on top of the opposition – the club has achieved that. I think that the magic of the San Mamés has been passed onto the new stadium, honestly it’s incredible when the crowd gets going. All the noise remains in the stadium, and that’s without the roof. Once they install that, it will be an incredible stadium.

LFP.es: What are the objectives for the Lions this season, is the Champions League just a dream or a realistic goal?

Mikel Rico: This team is ambitious. Our goals are set high and we want to finish as far up the table as possible but we have to keep our feet on the ground. Of course the Champions League could happen, but the important thing is to forget about the league table, concentrate on picking up three points from every three available, and then with seven or eight matchdays to go, having a look at what we can aspire to and trying to reach that goal in the remaining fixtures.

LFP.es: What is your own assessment after a few months with Athletic?

Mikel Rico: My assessment is very positive. On a sporting level, we are doing great. It was a difficult year with the change of manager and players, and it has required a transitional period, but we have coped excellently. Personally speaking, I am happy to know Athletic from within, and to be part of the Lions. I honestly couldn’t ask for more.