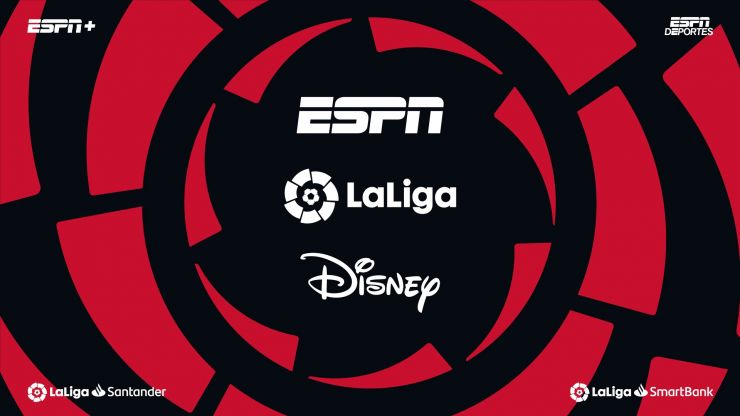 ESPN+ to be the English- and Spanish-language home of LaLiga: live coverage of all 380 LaLiga Santander matches and a season-long schedule of LaLiga SmartBank matches.

ESPN and LaLiga have reached an expansive, long-term agreement that will make ESPN+ the new English- and Spanish-language home for LaLiga Santander and LaLiga SmartBank in the United States for the next eight seasons (through 2028-29). Beginning in August, hundreds of live matches across both leagues will be available each year, exclusively on ESPN+. ESPN is already the home of Spanish Copa del Rey, Copa de la Reina and Supercopa de España.

LaLiga Santander, the top division in Spanish soccer, is one of the world’s marquee sports leagues, featuring 20 clubs, including perennial global powers FC Barcelona, Real Madrid, Atletico Madrid, Sevilla FC, and more. ESPN+ will stream live and on-demand replay coverage of all 380 LaLiga Santander matches per season. In addition, ESPN+ will livestream a selection of LaLiga SmartBank matches each round all season long, including five postseason promotion play-offs. All matches will be available to fans in both English and Spanish.

Select matches will air across ESPN networks each season, with coverage and highlights also available on SportsCenter and other ESPN studio programs, as well as on ESPN digital and social platforms.

“This agreement will bring the excitement, passion, iconic clubs and global superstars of LaLiga to U.S. sports fans with unprecedented access and coverage,” said Burke Magnus, Executive Vice President, Programming & Original Content, ESPN. “As the sport of soccer continues its ascendance in the U.S. market, we are incredibly excited to work with LaLiga to establish a deeper connection to American fans through our company’s industry-leading streaming platforms, television networks, and digital and social media assets.”

“We are absolutely thrilled to bring LaLiga to ESPN in the U.S.,” said Javier Tebas, President, LaLiga. “This is an historic eight-season agreement in U.S. soccer broadcasting that speaks to the power of LaLiga and its clubs in the largest media market in the world and will bring the world’s best soccer league to American screens in a more comprehensive and modern way than ever before.”

Added Russell Wolff, Executive Vice President and GM, ESPN+: “This agreement creates a true home for LaLiga in the U.S. for years to come and cements ESPN+ as the premier platform for soccer. We’re excited to showcase the brilliance of LaLiga in our English and Spanish coverage for the growing legion of soccer fans and ESPN+ subscribers.”

Said Boris Gartner, CEO North America, LaLiga: “Partnering with ESPN will allow us to have unique LaLiga programming across ESPN+ and ESPN’s network and digital platforms, super-serving existing fans and introducing new consumers to the drama and passion of LaLiga. The league, clubs, and players will be as close to the American fans as they’ve ever been at a time where soccer is growing leaps and bounds in the U.S.”

The deal also includes rights for Canada. TSN and RDS, Canada’s leading sports networks, will deliver comprehensive coverage of LaLiga matches, highlights, and news to Canadian viewers through multiple platforms, including live streaming on TSN.ca, RDS.ca, and the TSN and RDS apps.

Highlights of the long-term agreement include:

Beginning Saturday, May 15, a curated collection of LaLiga programming will debut on ESPN+. Highlights include an ESPN FC LaLiga special; episodes of LaLiga Center spotlighting the best goals, the best U.S. players in league history, and more; LaLiga Top Moments; the three-part Galacticos documentary about Real Madrid in the early 2000s; and United States of LaLiga, a showcase of unique stories about LaLiga fans across North America.

This landmark deal follows the creation and establishment of LaLiga North America, a joint venture between LaLiga and Relevent Sports launched in 2018 with the goal of helping grow soccer in the U.S. and getting LaLiga, its clubs, and players closer to American fans. LaLiga and Relevent Sports have successfully established a leading partnership model to help grow the sport and the brand of international leagues and clubs in the most important media market in the world.

LaLiga attracts the biggest stars and is currently home to global icons such as Lionel Messi, Sergio Ramos and Karim Benzema. For the past 11 years, the Ballon D’Or award for best player in the world has gone to a LaLiga player. LaLiga is also developing some of the most exciting young talent in the world including João Félix (Atletico Madrid), Vinícius Jr. (Real Madrid), Ansu Fati and Pedri (FC Barcelona).

In addition to the league’s strong on-field record in international competitions, LaLiga is home to some of the biggest rivalries in soccer. El Clásico, the matchup between Real Madrid and FC Barcelona, is arguably the most popular and storied derby in global soccer. Other prominent derbies include El Derby Madrileño (Real Madrid and Atletico Madrid); Basque Derby (Athletic Club vs. Real Sociedad); and El Gran Derby, Sevilla FC vs. Real Betis.