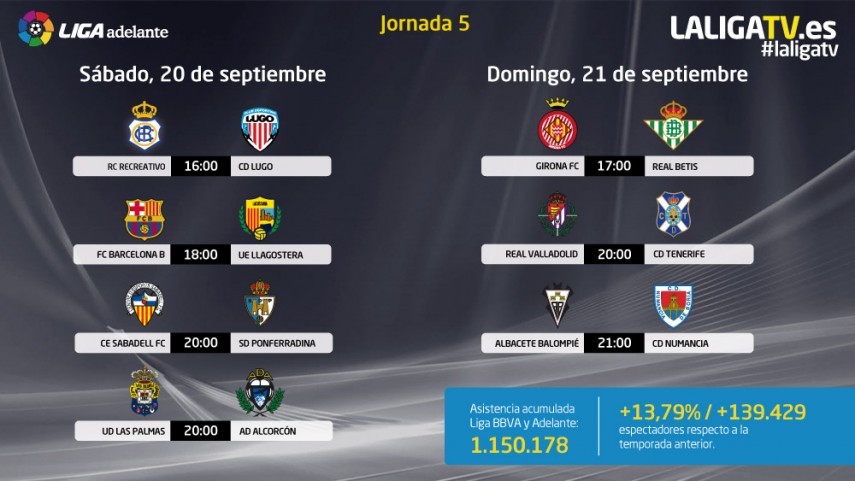 Like every weekend, football fans have the chance to watch seven Liga Adelante matches completely free, regardless of their geographic location. Four of them will be shown on Saturday and the remaining three on Sunday. Seven matches on a Liga Adelante matchday five that promises to be a thriller.

The weekend of football gets underway with RC Recreativo de Huelva - CD Lugo, on Saturday at 16:00 in a match in which the team from Galicia will be trying to sink their opponents, who are yet to taste defeat this season. The Nuevo Colombino will provide the stage for the clash.

Immediately afterwards, FC Barcelona B and UE Llagostera square off in an all-Catalan clash in which Santi Castillejo’s men will test the Azulgranas, who currently occupy fourth position in the Liga Adelante. Next, there is a double serving as CE Sabadell FC- SD Ponferradina and UD Las Palmas - AD Alcorcón battle it out for three points on Liga TV to close an entertaining Saturday session.

On Sunday, Liga TV has prepared three matches to complete the fifth matchday of the Liga Adelante. At 17:00, the Estadio Municipal de Montilivi hosts what will be one of the encounters of the weekend, Girona FC - Real Betis Balompié. At 20:00 it will be the turn of Real Valladolid CF and CD Tenerife, in the Estadio Municipal José Zorrilla, in search of three points that would take the home team to the top or get the Islanders out of the danger zone.

At 21:00, Albacete Balompié and CD Numancia will be responsible for bringing the matchday to an end in a match that the side from La Mancha approach with their confidence sky high after victory in the Benito Villamarín. They will be taking on Anquela’s men, who make the trip intent on turning things around after their last defeat and recording, like their opponents, their second win of the season.