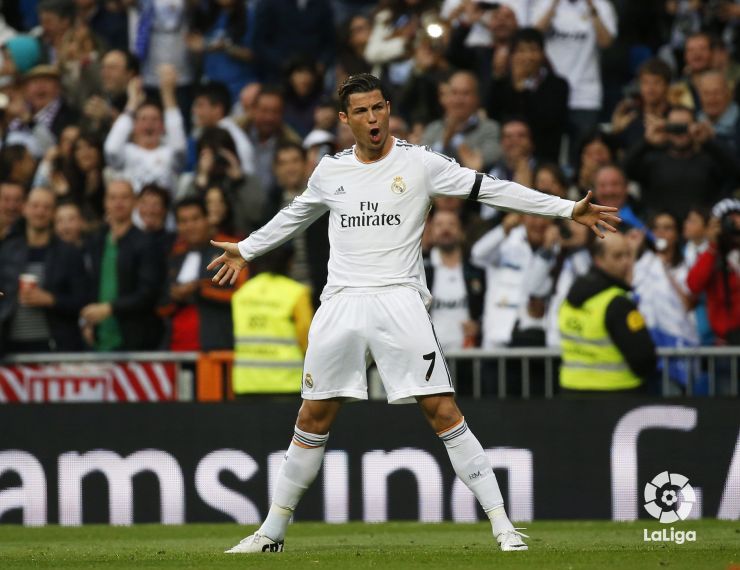 Two Cristiano Ronaldo goals, one from Ramos and another from Carvajal earns the Madrid side three points that keeps them right in the title hunt. Osasuna will have to wait to seal their safety.

Real Madrid CF continue on their good run of form with a 4-0 victory over CA Osasuna in the 35th round of Liga BBVA fixtures. Carlo Ancelotti's side moved up to second and keep their hopes of winning the title alive.

The Santiago Bernabéu welcomed in the first title of the season. The squad showed off the Copa de SM El Rey won nine days ago before the game against Osasuna. The match was barely six minutes old when Cristiano Ronaldo brought the Bernabéu to its feet with his 100th league goal in front of his fans in Liga BBVA. Osasuna's attempts to contain Madrid didn't have the desired effects, and the home side were always comfortable. Once again it was the Portugal forward who showed power and placement with his second goal of the game, making it 30 for the campaign.

Half time didn't put the brakes on Madrid. They carried on determined to win, and didn't let the Navarra outfit near their box. It was Sergio Ramos who sealed the win with a nice header from an Ángel Di María cross. In the closing minutes Real Madrid rounded off the scoring through a Dani Carvajal goal, laid on by Isco. The defender beat goalkeeper Andrés Fernández to the ball and scored with a header. This defeat postpones the visiting side's ambitions to confirm their safety for another week at least.