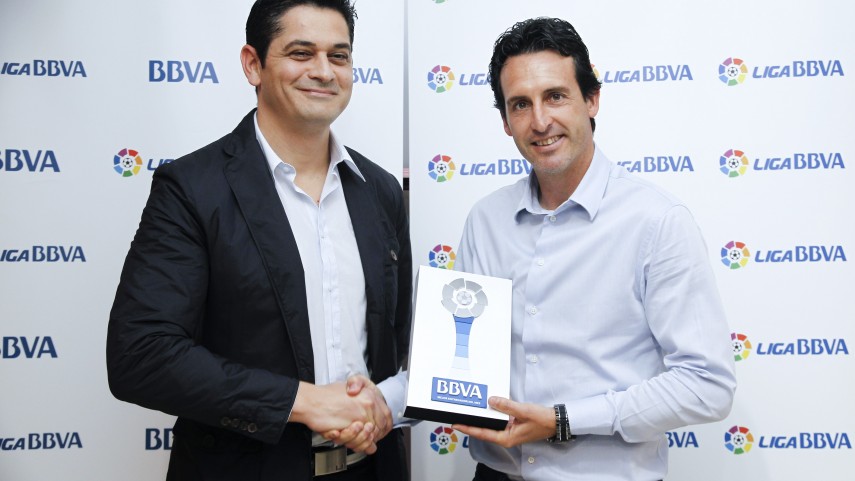 Emery Liga BBVA manager of the month for March

The Sevilla boss has been awarded the prize for last month thanks to his side’s six consecutive wins.

Unai Emery, manager of Sevilla FC, has been awarded the BBVA Prize for manager of the month in Liga BBVA for the month of March by the Liga de Fútbol Profesional's main sponsor.

The Andalusian side's results in the last few games have catapulted them up to the European places. From their win over Rayo Vallecano, up until their loss in Vigo, they racked up six consecutive wins, taking 15 from 18 possible points against Real Sociedad de Fútbol, UD Almería, Real Valladolid CF, CA Osasuna, Real Madrid CF and RC Celta de Vigo.

Sevilla are one of the three sides who have beaten Real Madrid, Carlos Bacca scoring both goals in the 2-1 victory on the 26th of March. The Colombian forward also scored against Osasuna and Almería, as did strike partner Kevin Gameiro, who has also been indispensible to the side's good run with four games.

In addition to their good results in Liga BBVA, the Basque manager also beat Real Betis Balompié on the way to the Europa League semi-finals. RC Celta de Vigo provoked the Andalusian side's only defeat in March, but it was merely a little slip following Sevilla's good form under the guise of Unai Emery, a legendary Liga BBVA manager.