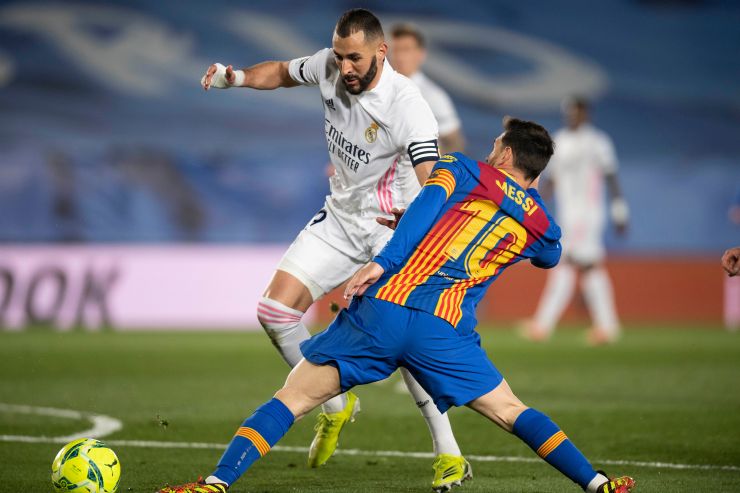 LaLiga Santander's #ElClasico was certainly no let-down for football lovers, with both teams bringing goals, excitement and plenty of passion. Don't miss out on the key stats and the standout players of the match!

Real Madrid and FC Barcelona starred in an epic clash under the downpour at the Alfredo Di Stefano Stadium. Los Blancos were the better team in the first half and managed to score on two occasions. However, you can never write off the Catalan club, and they battled and penned in the Madrilenians, almost doing enough to eke out an equaliser.

The goalscorers for Los Merengues were the team's top scorer, Karim Benzema, and their most proficient provider, Toni Kroos.

The Frenchman scored the opener on 13 minutes to put Real Madrid in the ascendency with a sublime backheel from the centre of the area, topping off a perfect move and a measured cross from Lucas Vazquez. The German, meanwhile, doubled their advantage in the 28th minute after a free-kick from the edge of the box deflected past a hapless Ter Stegen and into the back of the Barcelona net.

Los Azulgranas would not reply until the hour mark, when Oscar Mingueza produced a deft right-footed finish from the middle of the box off a Jordi Alba assist. Neither of the teams were ready to settle for the status quo and battled it out over the final half hour as if it were a cup final, resulting in chances for both teams as they sought to seize the three points.

During #ElClasico, FC Barcelona had the lion's share of the possession and were the more advanced of the two teams. According to Mediacoach data, Ronald Koeman's men had 68% of the ball, of which 41% was in the opposition's half. Clearly, Zinedine Zidane's charges dropped deeper and compressed the lines after earning a two-goal lead in the first 28 minutes. In fact, Los Blancos played 7 metres closer to their own goal line than their average this season in LaLiga Santander and their lines were 3 metres closer together than normal. These figures show the excellent defensive work produced by Real Madrid during the match, particularly deep in their own territory.

Madrid sought to catch Barcelona on the counter, with quick and searching attacking transitions in a bid to get in behind the Azulgrana centre-backs. There was a notable personal duel between Vinicius Junior and Oscar Mingueza, the two players who clocked up the highest speeds in the game. The Brazilian demonstrated his blazing pace in his forays down the left flank, accumulating a total of 1,090 metres at speeds of over 21 km/h and running 735 metres at over 24 km/h. The Madrid forward was #ElClasico's most threatening player, completing 75% of his dribbles successfully. However, planted in front of him was the young Cule, who despite being charged with keeping the striker's pace in check, managed to complete the game as the player with the most ball recoveries, regaining possession for his side 13 times.

Jordi Alba had a decisive impact on the Azulgrana game, despite the excellent work of Fede Valverde. The Catalan full-back was the player who completed the most passes in attacking areas and provided the assist for Mingueza to score. As usual, Leo Messi was one of Barça's standout performers. The Argentine forward was the most active attacking force with seven shots, two of them on target, and a 70% dribbling success rate. Likewise, the Azulgrana number 10 played a key role in his side's build-up play, completing 13 long passes and two final balls for teammates to shoot.

On the other hand, Real Madrid not only stood out for their rapid attacking transitions, but also for their efficiency in the first half. The outfit overseen by Zinedine Zidane was the most clinical over the course of the opening 45 minutes, in which, of their eight attempts, four were on target and two nestled in the back of the net. In this regard, their French frontman took the most shots, taking three of the team's eight attempts on goal. The right flank, through Valverde, Lucas Vazquez and Alvaro Odriozola, was their preferred avenue of attack and the area from which the team completed 75% of their crosses, one of which led to the goal by Benzema, the man with the most shots in the match together with Toni Kroos, on three apiece.

Once again, the middle of the park was a key area for Real Madrid. The Croatian midfielder, Luka Modric, was one of the standout players for Los Blancos. Not only was he the player who ran the furthest (10.1 km), he was also decisive in the team's transitions, successfully completing 100% of his passes. Furthermore, with 45 involvements, he was the most active player in making forward passes and ensuring the continuity of his team's play. The Brazilian midfielder, Casemiro, was another important player: in addition to winning the ball back the most times for his team in El Clasico, he is also one of the top ball-winners in LaLiga Santander as a whole.

Thibaut Courtois and Ter Stegen were the last line of defence for the two teams and made three saves and one save respectively to keep out dangerous shots that threatened to find their way into the back of the net.

The most hotly anticipated clash of the season turned out to be a scorcher of a match, which left fans more than satisfied, with both teams demonstrating no end of determination and desire to win the three points.

The excitement continued to the very last kick of the game, with everything still hanging in the balance until the referee blew the final whistle and called the victory for Los Blancos, who got themselves ahead and managed to fend off the onslaught from Barcelona in the dying minutes.

It was a match in which all of the players played a starring role in each of their positions and whose exertions had a decisive impact on the final result. It was also a match that shook up the order in the LaLiga Santander table, in which Real Madrid currently hold second place on 66 points and FC Barcelona sit third with 65. Anything can happen in the eight games left to play in the competition, currently led by Atletico Madrid on a total of 67 points. Who will come out on top and claim the LaLiga Santander title? To find out… you have to live it!