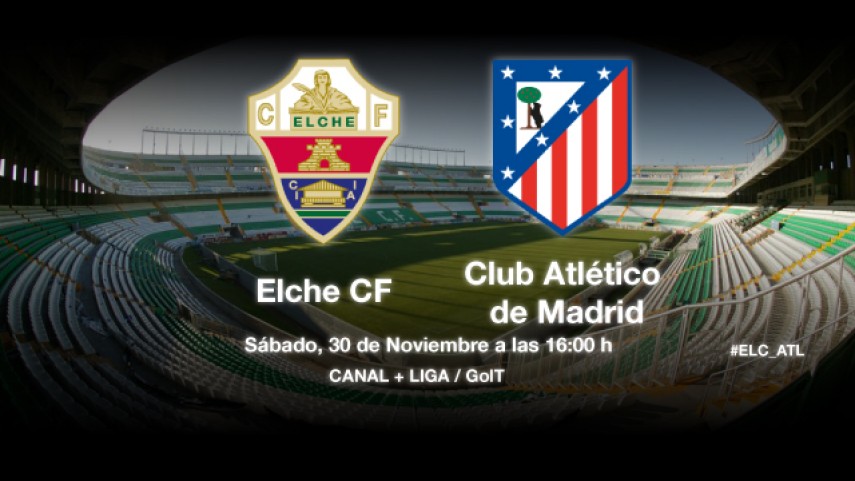 Elche to test a solid Atlético

Simeone will not be resting on his laurels against an Elche that has proved tough to beat in its home stadium, while Escribá hopes to spring a surprise on the second-place team.

Matchday 15 of the Liga BBVA sees Club Atlético de Madrid visit an Estadio Manuel Martínez Valero in which Elche CF have proved a hard nut to crack since returning to the Spanish top flight.

In their last match, Fran Escribá's men beat Valencia CF 2-1 at home, having previously asked a lot of questions of visitors Real Madrid CF (1-2) and Real Sociedad de Fútbol (1-1). Manu del Moral is still injured, but the team's coach still fancies his side's chances: “We have to play better than we did against Valencia. If we put the work in we can win the game. We are going to give it our all. If there is one thing about the Liga BBVA that worries us it is matches like Saturday's against Atlético”.

For their part, Diego Simeone's men have no intention of applying the brakes. Mario Suárez is still suffering from swelling in his knee, but his is the only name on the sick-list, so the rojiblancos' will be hoping to follow in the wake of FC Barcelona and confidence will be sky-high after their 7-0 drubbing of Getafe CF. “I do not have the word 'easy' in my vocabulary, we are realists and Elche is a dangerous opponent", stated Atlético's Argentinian manager.