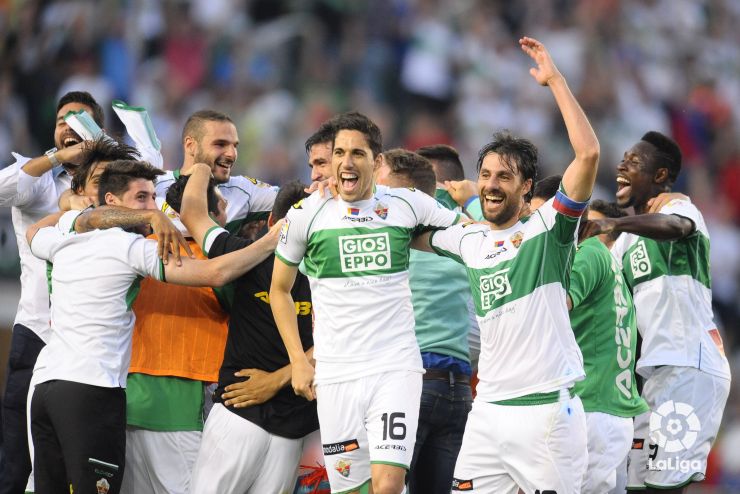 With just one matchday to go in the championship, Fran Escribá’s side managed to secure their survival in the best way possible: in front of their supporters and against FC Barcelona.

Elche CF will go into the final matchday having achieved their objective. On the penultimate matchday the ilicitanos managed to round off their season on their return to the Liga BBVA and against FC Barcelona, securing their survival. As ever, the team went out without fear and aware of what was at stake, standing up to one of the most powerful teams in the championship.

There were no goals, but nothing could prevent the Martínez Valero from turning into a big party in which the team and fans celebrating their great achievement. Fran Escribá had already alluded to it: "With the support of these fans, it would be impossible not to stay up". And the fact is Elche’s home ground has unquestionably become a fortress in the second half of the season. The team has managed to take points from every encounter, with four victories and five draws, with Ángel, the Levante UD player, the only opponent who has managed to breach Manu Herrera’s goal.

Good play and solidity have been the keys for this team, who have more than fulfilled their goal set at the beginning of the season. In this competitive and exciting championship, the side from the province of Alicante, with the last three points still up for grabs, are already safe in 14th place of the Liga BBVA with 40 points.

The franjiverdes have overcome the final stages of the season with draws against the azulgranas and Levante, but the giant step was undoubtedly taken on matchday 36 at La Rosaleda. Garry Rodrigues’ goal against Málaga CF earned Escribá’s side a vital victory that meant their survival was virtually guaranteed.

The great work of the Valencian manager and the squad’s top goalscorers, Ferrán 'Coro' Corominas and Richmond Boakye, have driven the team to success, and all they have to do now is enjoy their final outing of the campaign against Sevilla FC.