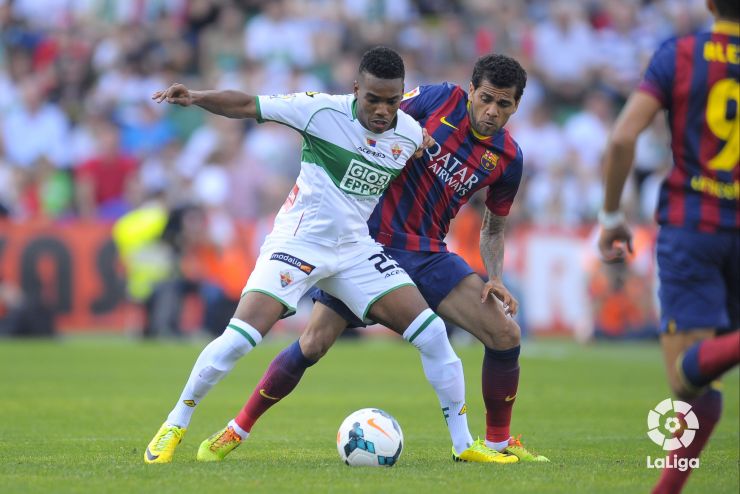 Elche save their skin, Barça are still alive

The ilicitanos claimed a point that secures their survival. The azulgranas will be champions if they beat Atlético on the last matchday.

Elche CF and FC Barcelona staged a thrilling draw on matchday 37 of the Liga BBVA. There were no goals, but there was excitement in spades. The draw confirms Elche’s survival and leaves Barça with a chance to claim the title on the final matchday after the leaders Club Atlético de Madrid only managed a draw.

Manu Herrera was the man of the match. The goalkeeper from Madrid kept Barcelona out with several impressive saves. The azulgranas were not in their best form, but they created several dangerous chances that meant that the home side’s keeper had to be at his best. Andrés Iniesta, Lionel Messi, Pedro Rodríguez and Alexis Sánchez had attempts in the first half, but they were unsuccessful against an Elche who barely visited their opponents’ area to keep their defensive structure.

Herrera’s exhibition continued in the opening stages of the second half, when he prevented another goal after an individual play from Messi. The minutes went by and the tension mounted at the Martínez Valero. Elche were moving closer to salvation and Barcelona were looking for a goal without much inspiration. To the delight of the home side the score remained the same and they will remain in the Liga BBVA for another season. Barça are now three points adrift of Atlético, so a victory against the rojiblancos on the final matchday will earn them the title. As exciting as it gets.