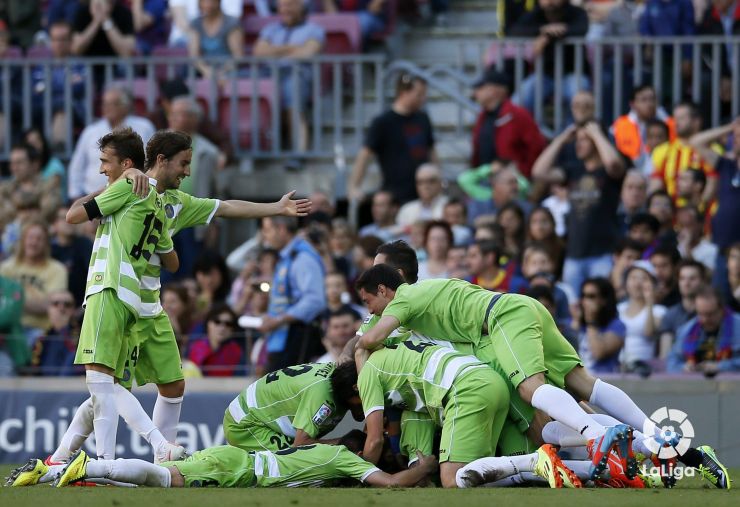 Their good results against Málaga, Barcelona and Espanyol, respectively, give them impetus in their fight for survival on a matchday in which Osasuna fell to Celta at home.

Excitement was ever-present in the four games held this Saturday on matchday 36 of the Liga BBVA. It was a matchday with a great deal at stake for several teams who are in the danger zone in the final stages of the season.

One of the big beneficiaries of the Saturday on their own merit was Getafe CF, who end the day outside of the relegation spots. Cosmin Contra’s men fought to the end to earn a point at the Camp Nou with a great performance from Ángel Lafita. The Madrid side had to fight back twice before the final result was decided.

It was also a fruitful day for Elche CF, who claimed an almost decisive victory at La Rosaleda against Málaga CF. With their three points, Fran Escribá’s side moves away from the relegation spots to go into the final stretch of the season with peace of mind.

The weekend was anything but positive for CA Osasuna, who fell against a mathematically safe RC Celta de Vigo. Nolito, with two first-half goals, sealed the match and showed that he is in his best form of the season. The Navarrese side, although above the relegation zone, will go into the final two matchdays in the fight for survival.

The Saturday came to an end at the José Zorrilla Stadium, where Real Valladolid CF completed another matchday without losing (extending their run to nine). A single goal from Antonio Rukavina and a great performance from goalkeeper Jaime Jiménez earned them victory against a RCD Espanyol who are very close to securing survival in the Liga BBVA.