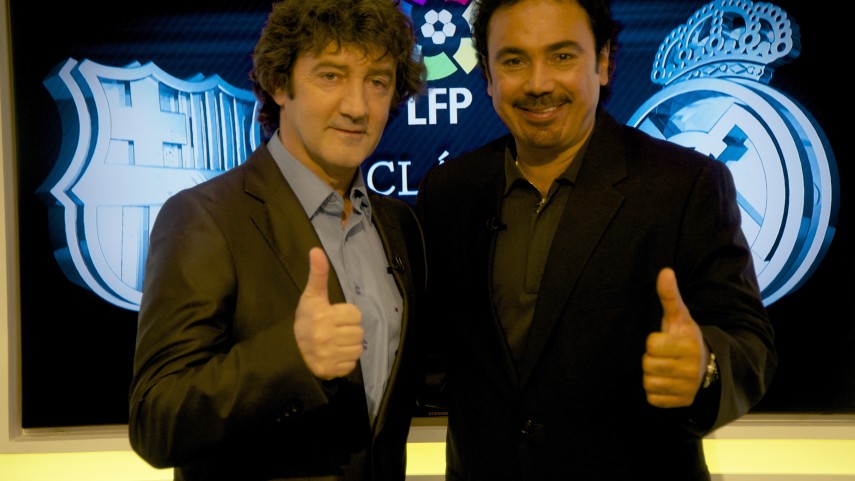 After their presentation in Miami, Hugo Sánchez, the LFP ambassador in North and South America, and José Mari Bakero analysed the upcoming match.

Hugo Sánchez and José Mari Bakero, rivals on the pitch but friends off it, began the official countdown to El Clásico, which will be played this Saturday in the Camp Nou. In a live broadcast from the BeIn Sport studios in Miami, which was available on www.lfp.es, the former players talked about the significance of El Clásico.

"You don’t need any extra motivation ahead of a Clásico", Hugo Sánchez declared, while José Mari Bakero explained that "it’s a very tense match which tests you". Both players understand perfectly the significance of playing in a FC Barcelona vs. Real Madrid clash, and agreed that “Saturday’s match is going to be different”.

Hugo Sánchez made his predictions ahead of the encounter: "Barcelona will want to take advantage of playing at home. Leo Messi’s return will strengthen them, but even so this rivalry is a coin toss and there’s no knowing what might happen". José Mari Bakero, meanwhile, said that "this Clásico is very early in the season. I’m positive that both teams will put on a great display".
On the topic of the atmosphere, both former players agreed that "it is different to any other match, and you also feel different playing in it". The Mexican forward added that "they are professionals and know what this game means, and as a team they know they have players with a lot of quality. We’ll have to see which side stamps its authority on the game from the beginning".
Both men were of the same opinion as to which players will grab most of the attention: "It is a privilege to have Leo Messi and Cristiano Ronaldo both playing in the Liga BBVA". In Barkero’s opinion, "Leo Messi is the most consistent player in Barcelona’s history. He is efficient, competitive, spectacular and clinical. He’s the boss", while Sánchez chipped in with "Cristiano Ronaldo is Real Madrid’s undisputed leader".

Saturday’s Clásico will have an estimated audience of 1 billion people all over the planet. The Liga BBVA attracts the highest audience figures in the world, and is broadcast in over 210 countries.