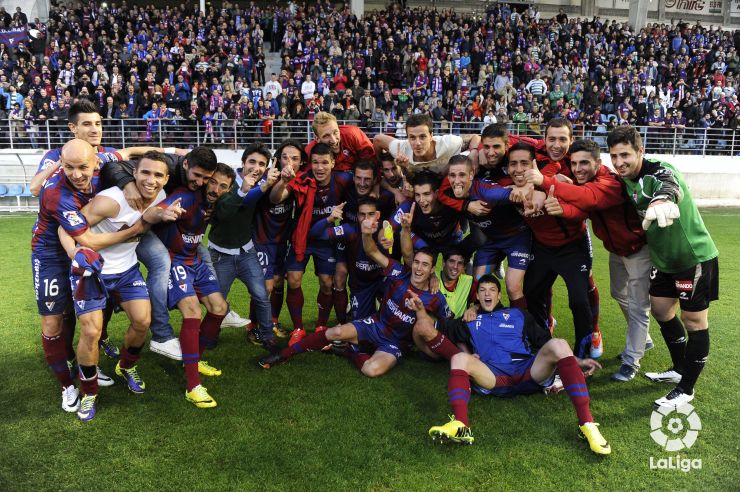 The Armeros have rounded off an unforgettable year by finishing first to become champions of the division with 71 points.

"We've worked hard to achieve promotion and it hasn’t been a coincidence", Gaizka Garitano said to LFP.es, when it looked like SD Eibar had reached the top. But thanks to the hard work and humility of the team, the Basque side have found another reason to celebrate, claiming the 2013/14 Liga Adelante champions' title with 71 points.

With unstoppable ambition, Eibar’s latest feat comes on top of their achievement on matchday 40 of the championship, when for the first time in the club’s 75-year history they won promotion to the Liga BBVA. This time, Girona FC's 3-1 victory over RC Deportivo de La Coruña gave the title to the Basque side, who put the icing on the cake with a 1-1 draw against CD Numancia on an exciting matchday that brings to a close a dream season for Gaizka Garitano's men.

The Basque manager was in fact one of the main reasons behind this glorious triumph that has been echoed around the football world, together with a strong defence and the goalkeeper with the best record in the division: Xabi Irureta. Although, without doubt, midfielder Jota Peleteiro, with 11 goals, has been the player who has posed the most difficulties for their opponents on the field of play.

All in all their success has come from the unity of a team in which every player has done his bit to help Eibar complete their best campaign in history, and they will now prepare to welcome the best players in the world to their Gipuzkoa municipality. Determination will be the main ingredient they will need in an enthralling challenge that the Ipurua will follow closely next season.