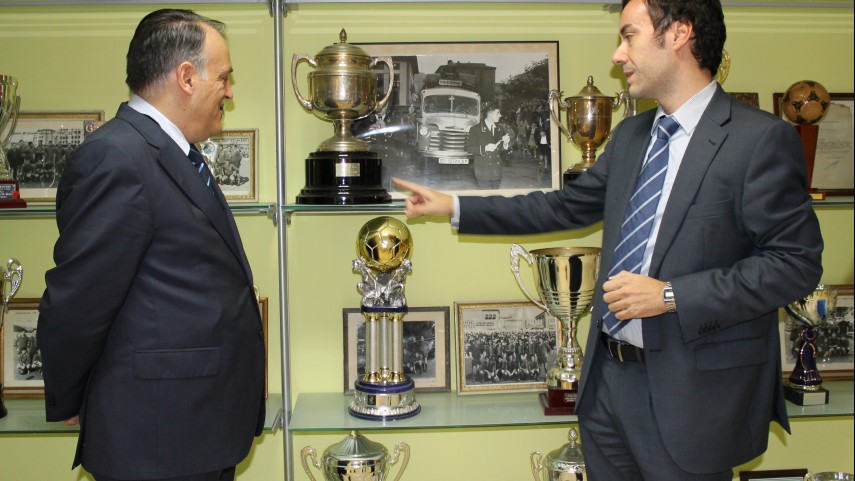 Eibar, a model of example for the LFP

The Liga de Fútbol Profesional visited Eibar, saying that the Basque outfit are a perfect example of how a club should be ran.

As part of the arranged meetings that the Liga de Fútbol Profesional (LFP) has with all its affiliated clubs and PLCs, Javier Tebas visited SD Eibar. The LFP president met with his counterpart at the Basque club, Álex Aranzábal, and after their meeting at the Ipurua stadium the two held a press conference.

The LFP stressed through their president how proud they were to visit a club like Eibar: "It’s a club that has learnt a lot from the past. They’ve always been a club with a strong identity in the world of professional football".

Tebas explained that clubs "aren’t big or small for their social appeal, fan base or takings, but for their organisation and economic situation. And on those principles, Eibar is a big club". In addition, the LFP president praised the economic model and philosophy that the club has always had.

About the Gipuzkoa side’s economic situation, he said he felt "proud that Eibar work with no debt", adding that it’s the "typical club that allows professional football to be sustainable". During the entire press conference, Javier Tebas emphasised what a perfect example of organisation Eibar is for the LFP: "we need the Eibar model in the LFP. The way to create good football is through this type of management, and the Liga is where you’d expect this to be". Alex Aranzábal specified that "thanks to the more exhaustive economic controls that the LFP have implemented, Liga Adelante is now more habitable for Eibar than it once was".