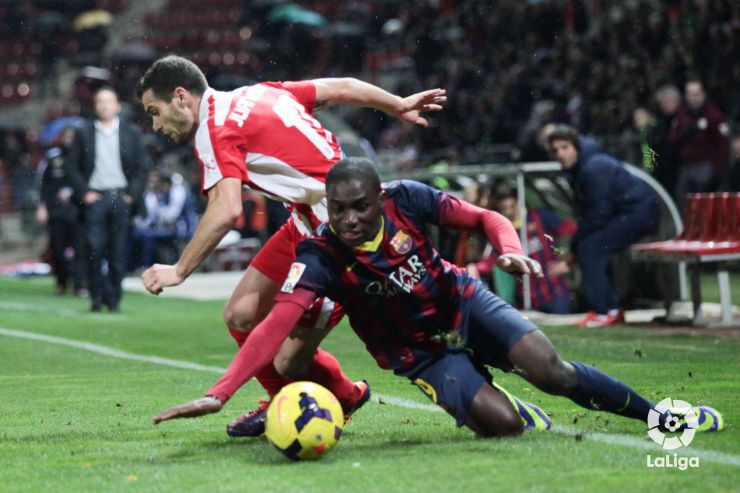 His impressive performances with Barcelona B in the Liga Adelante led to his first-team debut in the Copa del Rey.

At just 13 years of age Jean Marie Dongou began to live every kid's dream. With Samuel Eto’o as a mentor, Dongou made it to La Masía to become FC Barcelona's first African youth academy player. Since then, his rise has been meteoric. The player from Cameroon has now made his first-team debut in the Copa del Rey. His future is now a reality.

He came to Barcelona through the Fundación Eto’o at just 13 years of age. In 2008 he joined La Masía and in just one season he achieved something that only Lionel Messi had done before him: he debuted with three teams in different categories in the same season. At 15, when he was playing for the under-16s, he also played an active role in the under-19 A and B sides and became one of the azulgrana youth academy's top goal-scorers.

His Liga Adelante debut was drawing near. In the 2010/11 season, at little over 16 years of age, he played his first minutes against SD Huesca. He took part in 12 matches and scored two goals that helped him win a place in the reserve team squad the following season.

A pacey striker with great physical presence, Dongou was a regular for FC Barcelona B in the 2011/12 season, playing 31 matches and finding the net five times. This year, although he has not quite been up to scratch in front of goal, his rapid development has continued. He has now played 10 matches with Eusebio Sacristán's team and, although he is yet to score for the azulgrana reserves, he is the side's go-to forward.

His big opportunity came last Saturday and he made the most of it. Gerardo Martino included him in the squad for the fourth-round Copa del Rey match against FC Cartagena. Dongou came on for Alexis Sánchez in the 78th minute and got Barcelona's fourth and final goal in the Estadio Municipal Cartagonova. His speedy progression, his energy and the trust placed in him by Barça's coaches make the African striker a sure thing for the Catalonian club's future.