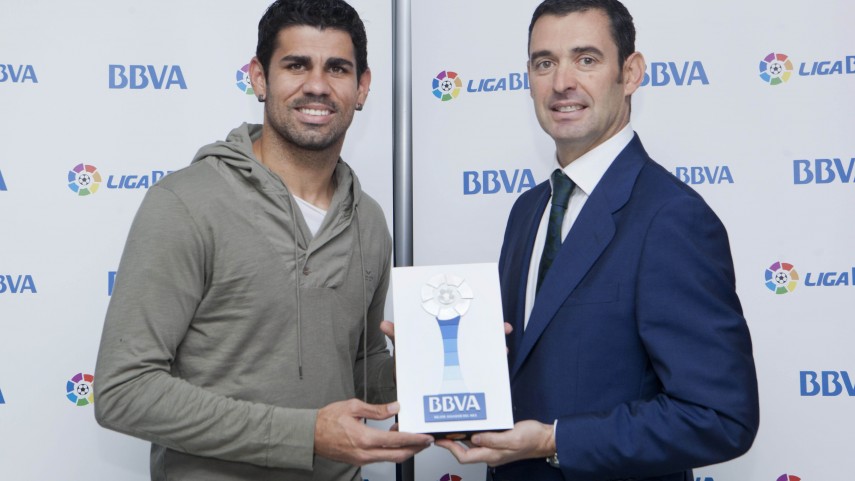 Diego Costa, the best player in the Liga BBVA in September

The Brazilian striker was honoured with the award on Friday for his great start to the Liga BBVA season.

Diego Costa has been awarded the Premio BBVA for the best Liga BBVA player in September, which is given by the main sponsor of the Liga de Fútbol Profesional.

"It is an honour to receive this Premio BBVA. We have had a great start to the season. If the team does well, the individual does well. It is complicated to beat Messi and Cristiano, but you have to keep trying", said the player.

The Club Atlético de Madrid striker has been one of the Liga BBVA's surprise packages this season with some unarguable statistics. He is the top goal-scorer in the competition with ten goals from nine matches, five of them in September: one against UD Almería, one against Real Valladolid CF, two more against CA Osasuna and another against Real Madrid CF in the Madrid derby. All the matches ended in victory for Atlético, who have had their best every start to the league.

Diego Costa has exploded out of the blocks in this Liga BBVA 2013/14 season, but he is already a veteran in the competition, despite his 25 years. He arrived at Atlético in 2007 and he was toughened by spells at RC Celta de Vigo, Albacete Balompié, Real Valladolid CF and Rayo Vallecano. Last season he became a stalwart for Diego Simeone's Atlético and this season he is demonstrated his insatiable appetite for goals.