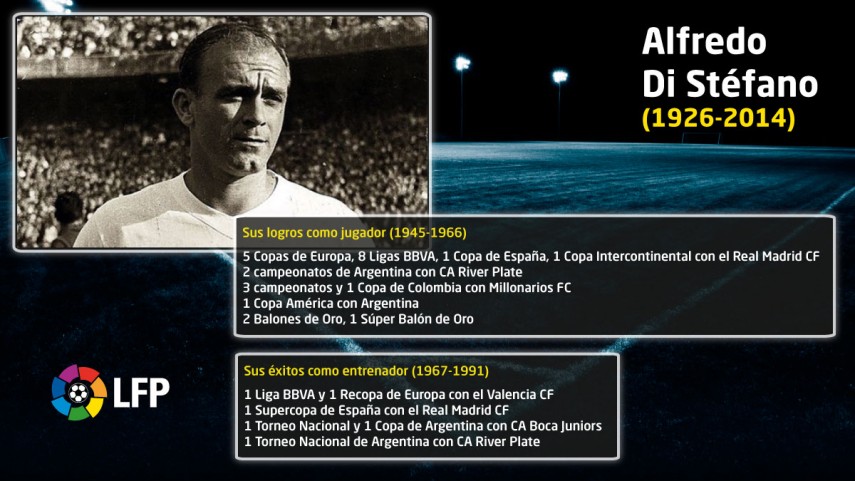 Di Stéfano, the memory of an eternal legend

The world of football is mourning the passing of the legendary ex-Real Madrid footballer and honorary president of the club, one of the greatest players of all time.

"You don't play finals… you win them". This famous quote from Alfredo Di Stéfano perfectly sums up the winning mentality of a man destined for glory. Because the life of Di Stéfano, who sadly passed away on 7 July at 88 years of age, was a constant example of fighting spirit, sacrifice and success. Today the entire footballing world is mourning his passing. An eternal legend has said his last goodbye.

The story of 'The Blond Arrow', as he was known in footballing circles, goes hand in hand with Real Madrid CF, the team he played for during eleven seasons (1953-1964) and subsequently managed twice (1982-1984 and 1990-1991). Di Stéfano also played for RCD Espanyol for two seasons (1964-1966) and managed other Spanish clubs such as Valencia CF, Rayo Vallecano and Elche CF.

After standing out in the ranks of River Plate in his native Argentina, where he had already tasted success at the age of 21 by winning the First Division and being the team's top goal-scorer, 'The Arrow' made the move to Colombia to find more success with Millonarios FC. He stayed there for four seasons and left behind unforgettable memories of three championships and one Copa de Colombia. But that was just the start of a brilliant career that took a new twist in 1953, the year he joined Real Madrid.

During his eleven seasons with the Whites, Di Stéfano won a total of eighteen titles, including five European Cups, eight Ligas, one Intercontinental Cup and one Copa de España. He won the hearts of the Madrid fans and was the soul of a legendary team that, decades later, was named the Best Club of the 20th Century by FIFA. Di Stéfano himself, together with Real Madrid's president, Florentino Pérez, collected the award on 11 December 2000.

He played his final matches with Espanyol, the club he joined at 38 years of age in the 1964/65 season. He was there for two seasons, before embarking on a successful managerial career. He returned to Real Madrid as manager in 1982 after coaching Elche, Boca Juniors, Rayo Vallecano, Castellón, River Plate and three spells at Valencia. With the Ché he won a Liga in 1981 and the 1980 UEFA Cup Winners' Cup, as well as a Supercup of Spain with the Madrid team and two national championships in Argentina with Boca Juniors and River Plate.

In recognition of his importance and dedication to the club, Real Madrid named him honorary president in 2000 and decided to name Real Madrid Castilla's stadium after him in 2006. Today football is mourning the loss of a man whose memory will live on forever.